The British star has reiterated his desire to face Wilder in his next scheduled fight at the national stadium after the American retained his WBC belt in a split decision draw with Tyson Fury at the weekend.

Wilder’s co-manager Shelly Finkel wants to resume negotiations for the Joshua fight, provided that terms remain private, and Matchroom Boxing boss Hearn is determined to agree a blockbuster bout with all the world titles at stake.

What took this fool so long? Like we ain’t been interested?!! 🙄Anyway well done Fury! they wanted to get you because they assumed you was finished!! I’ll give you a fair one when your ready! Either one of you! https://t.co/RlytsIrnud

“I won’t talk about the negotiations we’re having at the moment, because I did that last time and it bit me in the bottom,” Hearn told Sky Sports News.

Joshua has also welcomed a British battle with Fury, who climbed off the canvas twice during the Wilder fight, only to be denied victory by the judges’ scorecards in Los Angeles.

But Hearn believes the Joshua-Wilder fight must happen next instead of an immediate rematch for Fury.

“Josh is in camp now in America, and he would love to fight Fury, he would. 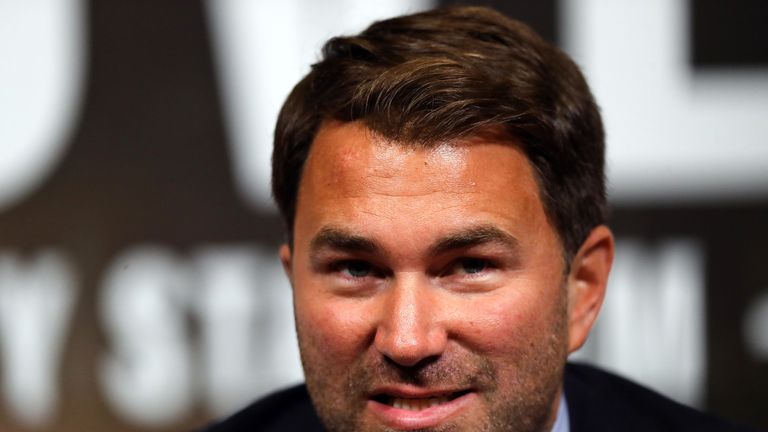 If Wilder really wants to be the undisputed heavyweight champion of the world, he must fight Joshua next, otherwise we may just all miss the boat on that one

“I still believe Anthony Joshua is hands down the best heavyweight in the world. I believe he knocks out Deontay Wilder and Tyson Fury, but maybe I’ll be wrong again, but it’s a brilliant time for the heavyweight game.

“There is a rematch that could happen between Wilder and Fury. But if Wilder really wants to be the undisputed heavyweight champion of the world, he must fight Joshua next, otherwise we may just all miss the boat on that one. But anything can happen.”

Watch Kell Brook vs Michael Zerafa in what could be his last fight in Sheffield, with Josh Kelly, Anthony Fowler and Jono Carroll on the undercard, live on Saturday, Sky Sports Action from 7pm, and Sky Sports Main Event from 8pm.