2:19 PM PT — A rep for Applebee’s has doubled down on what was told to cops about a fire hazard, telling TMZ … they simply couldn’t put 2 high chairs where Malcolm wanted, because it would’ve been dangerous. They even attached photos to show where her booth was, and you can see … it’s right near a set of stairs that appear to lead to an exit. Pretty tight space. 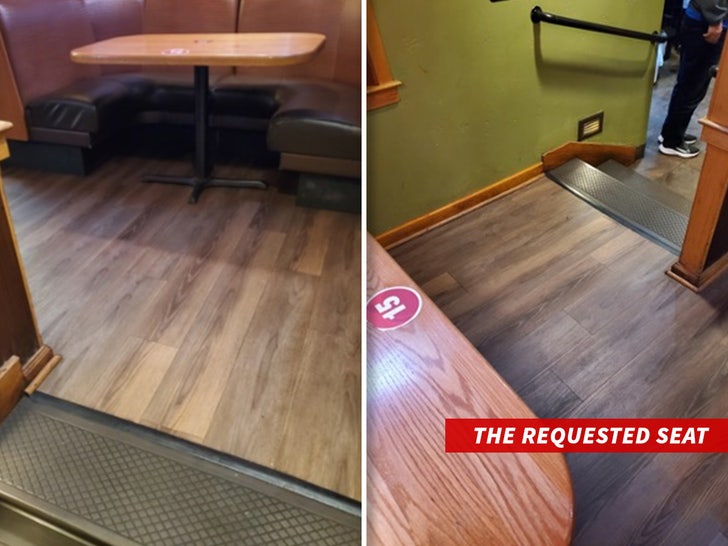 They add, “We made attempts to reseat the party at a different table that would safely accommodate children in the two high chairs. While we understand the guests may have been disappointed to not be seated at the booth of their choice, we must adhere to local guidelines to maintain a safe dining experience for all our guests.”

Here’s an odd one — a woman was arrested at an Ohio Applebee’s after getting ticked off the restaurant refused to give her 2 high chairs for 2 babies … and she streamed the encounter live.

Shannel Malcolm hit record when she and her family — consisting of 5 people total — allegedly got a hard time Sunday evening from the staff … all because, she says, she wanted 2 high chairs for her twin 1-year-olds. Seems like a simple request, right?

Well, the Marion County Sheriff’s Department tells TMZ … Applebee’s told responding deputies they denied Shannel the high chairs because she wanted them at a booth, which the restaurant told her would cause a fire hazard.

So, cops say the staff told them they offered to seat her at another table that could safely accommodate the 2 high chairs … but it doesn’t sound like that went over well.

The Sheriff’s Department says they tried calming down Shannel, who they say was acting unruly and wasn’t cooperating. There’s no evidence in the video she posted … in fact, she was complimentary to the cops. However, they ended up arresting her after cops first tried to resolve it by just giving her a court summons.

She was booked for disorderly conduct and obstruction of justice, and released later that evening.

One last thing about this … in her disbelief at the situation, Shannel — who is Black — does make mention of 2020 being “real,” and her eyes being “open” in light of this. Unclear if she was insinuating racism was in play here …. but if so, she never explicitly says so.

Now there’s a movement growing to boycott the Applebee’s over the episode. We’ve also reached out to the restaurant for more clarification … so far, no word back

Elizabeth Taylors Menorahs to be…

The Mandalorian Season 2: How…