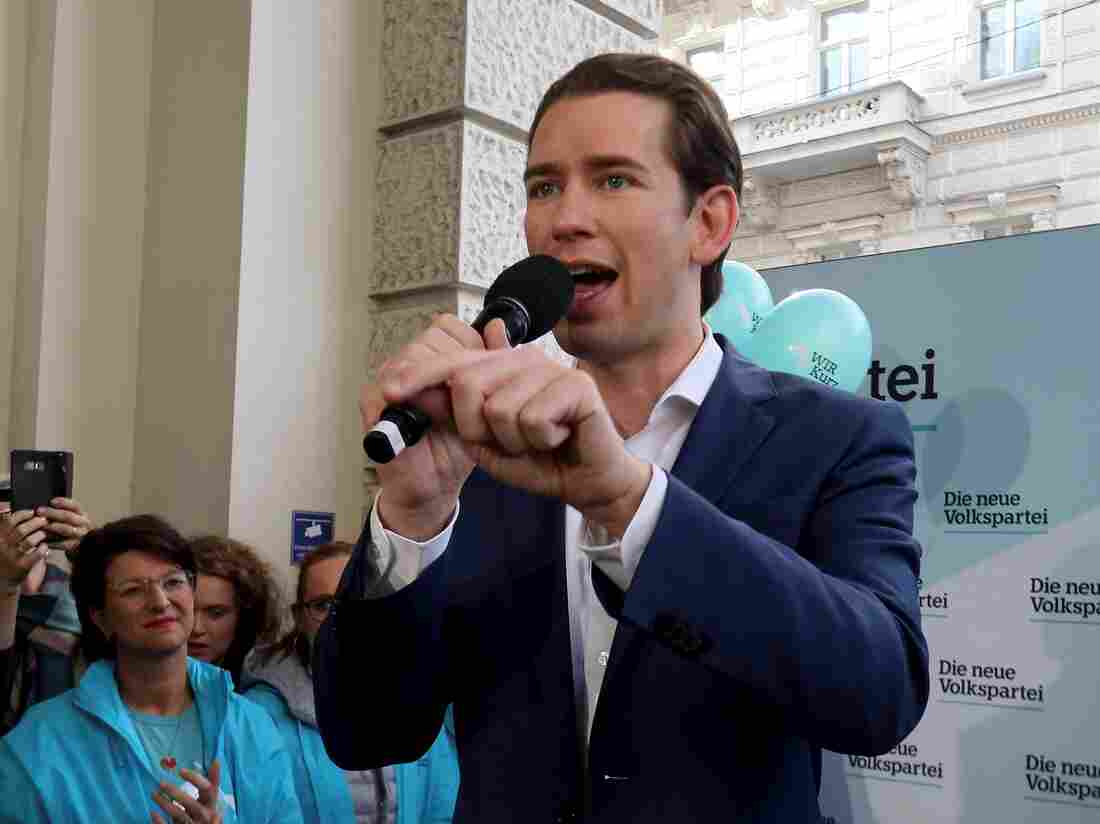 Former Austrian chancellor Sebastian Kurz from the Austrian People’s Party, OEVP, speaks at a closing rally ahead of elections in Vienna, Austria, on Thursday. The Austrian elections are on Sunday. 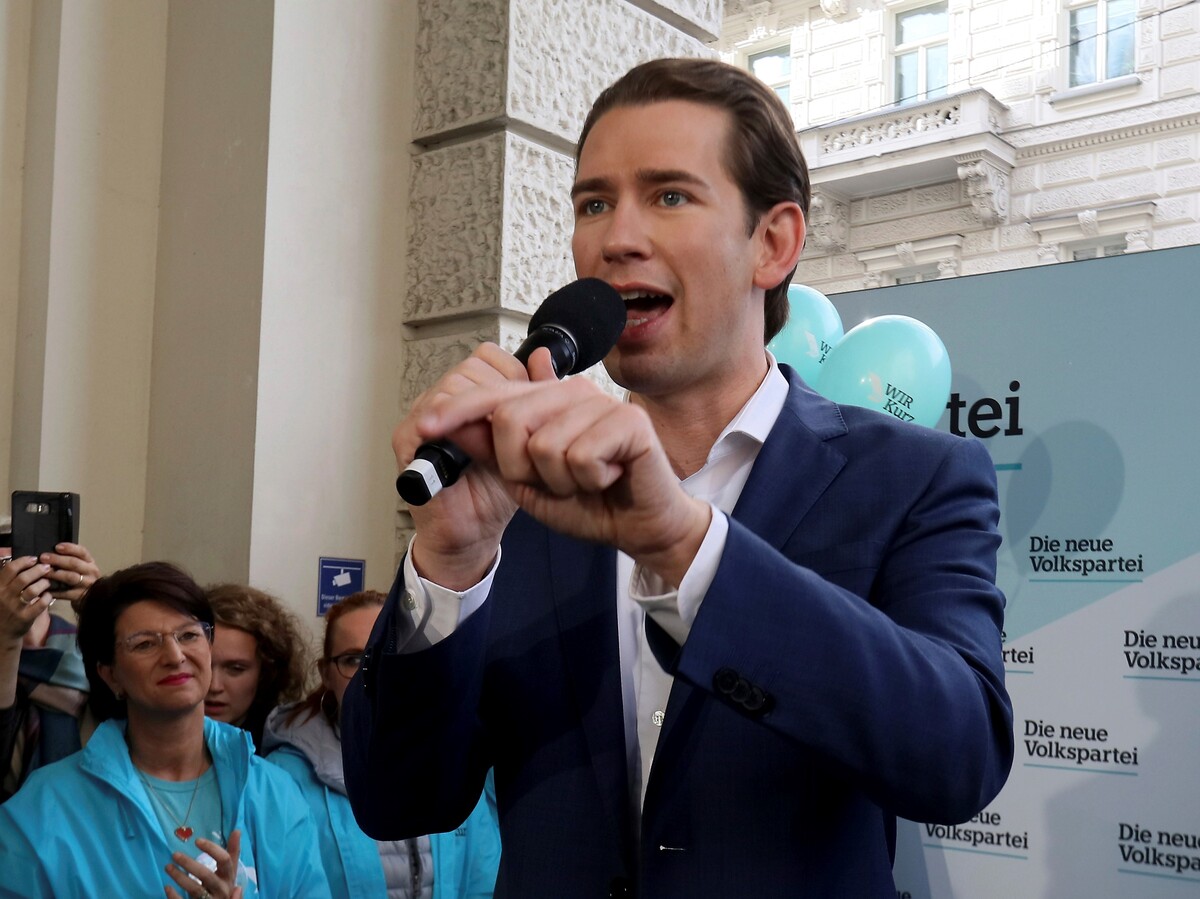 Former Austrian chancellor Sebastian Kurz from the Austrian People’s Party, OEVP, speaks at a closing rally ahead of elections in Vienna, Austria, on Thursday. The Austrian elections are on Sunday.

Austria’s youngest-ever chancellor, 33-year-old Sebastian Kurz, is expected to win back his job Sunday despite a cash-for-contracts scandal that brought down his government four months ago.

And, he could team up again with the far-right Freedom Party, which caused the scandal. Kurz’s conservative People’s Party is not expected to win enough parliamentary seats to govern alone.

“The radical right is very good at being in opposition, which creates headaches for Mr. Kurz,” says Reinhard Heinisch, a professor of comparative politics at the University of Salzburg. “But the Freedom Party is also very problematic.”

Kurz brought in the Freedom Party in 2017 with the intention of taming its worst tendencies. The party is known in Austria for populist rabble-rousing that vilifies migrants and Muslims. It has ties to radical right extremist groups like Generation Identity, which has links with the Christchurch terrorist who murdered 51 people at two mosques in New Zealand in March.

Instead, the partnership was an 18-month roller-coaster of disturbing headlines about the far-right party’s links to the Kremlin, a deeply anti-semitic songbook and a poem likening migrants to rats.

The final straw for Kurz came in May. His vice chancellor, Heinz-Christian Strache, then Freedom Party leader, was forced to resign after the German magazine Der Spiegel obtained and published a video from 2017, which was filmed secretly as part of a sting, showing him spending a boozy evening on the Spanish island of Ibiza with a woman posing as the niece of a rich Russian close to the Kremlin. In the video, Strache offers the woman government contracts if she supports the Freedom Party.

“Enough is Enough,” Kurz said then.

Strache resigned, the Freedom Party left the government, and Kurz lost a no-confidence vote in parliament. A caretaker government led by former supreme court judge Brigitte Bierlein, the first female chancellor in history, has run the country all summer with a quiet competence that’s won her admiration.

“People like having a government that’s not always in the media,” Heinisch says.

Scrutiny of an “unabashedly nationalist party”

The Freedom Party has made headlines for years.

Most recently, partly because of the Ibiza video, its ties to Russia have come under scrutiny.

While Austria has warm ties with Russia, the Freedom Party openly admires the Kremlin, raising eyebrows in the NATO-supporting West.

“It’s in our interests to have a balanced worldwide network of allies and not to be a U.S. colony,” says Johannes Huebner, a longtime Freedom Party member, during an interview in June. “The thing is, in Europe, there is overwhelming U.S. influence through NATO through the control of the financial system, through the media, through the entertainment industry.”

Like other radical right parties, they also oppose immigration and are unabashedly nationalist — which means something in Austria, the birthplace of Adolf Hitler. Many in the Freedom Party see the defeat of Nazi Germany “not as a victory for democracy but as a defeat for their cause,” Heinisch says.

Hitler annexed the country in 1938 but Austria did not go through the same process of post-war re-education as Germany.

“There was an anti-Nazi political consensus in the years after 1945 but there was never a consensus that you cannot cooperate politically with the far right,” says Bernhard Weidinger at the Documentation Center for the Austrian Resistance in Vienna.

“So the two big parties” — the center-right People’s Party and the Social Democrats — “they’ve always been flirting with the far right. And that of course, contributed massively to normalize policies of this party.”

The Ibiza scandal dented the Freedom Party’s support but not by much.

About one in five Austrians still support the Freedom Party, including retired IT administrator Kurt Blind, who runs a monthly meeting of party faithful at a beer-and-schnitzel restaurant in Vienna.

“We may not have as many members as the other parties yet,” he said in an interview in June. “But each month we grow.”

The party has won support with its anti-migrant rhetoric, polished in 2015, when a million asylum-seekers and migrants arrived in Europe.

Sebastian Kurz rose to prominence in Austrian politics by trying co-opt that hardline rhetoric and serve it up through “his clean-cut, millennial blandness” as a way to make it more palatable, says Nina Horaczek, an investigative reporter at the Austrian weekly Falter who co-wrote a biography of Kurz.

“He did not understand that repeating hardline anti-immigrant rhetoric in a nicer tone does not defeat far-right populists,” she says. “It makes them stronger.”

The Freedom Party’s influence was most obvious in migration policy. The government cut benefits for migrant families, banned headscarves in elementary schools, and threatened to force new asylum-seekers to work for less than $2 an hour. Dorms housing asylum-seekers were renamed “departure centers.”

In the town of Traiskirchen, just outside Vienna, Afghan asylum-seeker Daoud Saidi got the message.

“I’m not wanted here,” he says. “I told the Austrian authorities that the Taliban took over my village and that it’s not safe. They told me I had to leave Austria.”

Can the Freedom Party reconcile with Kurz?

Migration is not the top issue in this election.

But the Freedom Party still brings it up.

“On the issue of immigration, the Freedom Party has posters saying Mr. Kurz is learning from us,” says Heinisch, the politics professor in Salzburg.

As media have speculated that Kurz might team up with the Greens, which is pro-migration, in a new coalition government, the Freedom Party has told voters that if they stay home “that means the conservatives are going to do a deal with the Greens and then they’ll throw the borders open the immigrants will pour in,” Heinisch says.

“The slogan that the Freedom Party is posting is, ‘we need to be strong so we can keep the conservatives on the right path.’ “

For the Freedom Party, that means reconciling with Kurz, who remains popular.

“He’s no longer the messianic figure of Austrian politics he was a couple of years ago,” Heinisch says. “But he’s handsome, he’s rhetorically gifted, he’s young and, to a lot of conservatives, represents the future.”

The men tell a therapist how much they like and respect each other and how they share ideas. They sometimes answer questions in unison.

“We have so much in common,” Hofer says in the video. “We just need a little push to get back together.”