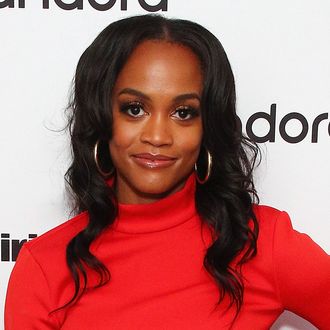 This weekend, former Bachelorette Rachel Lindsay had to disable her Instagram after receiving a wave of harassment from Bachelor viewers, following her recent interview with Chris Harrison and even more recent comments about current Bachelor contestant Rachel Kirkconnell’s offensive social media posts. Now, the executive producers of the Bachelor Nation, which includes The Bachelor, The Bachelorette, and their spin-offs, have issued a statement defending Lindsay against “severe online bullying, which, more often than not, has been rooted in racism.”

“As Executive Producers of The Bachelor Franchise we would like to make it perfectly clear that any harassment directed towards Rachel Lindsay in the aftermath of her interview with Chris Harrison is completely inexcusable,” their statement, posted to Twitter Monday evening, reads. “Rachel has received an unimaginable amount of hate and has been subjected to sever online bullying, which, more often than not, has been rooted in racism. That is totally unacceptable. Rachel has been an incredible advocate for our cast, and we are grateful that she has worked tirelessly towards racial equity and inclusion.”

Lindsay, who starred in The Bachelorette’s Season 13 after appearing as a contestant on The Bachelor, has long been a vocal proponent of racial diversity in the franchise. Following their interview earlier this month, in which Harrison defended images of Rachael Kirkconnell at an antebellum-themed event to Lindsay, the Bachelor host apologized for “perpetuating racism” and stepped away from the rest of this season of the ABC reality dating series.

Kirkconnell has also apologized for her posts, and has asked fans not to defend her past behavior, but Lindsay found her attempts to address the issue of racism, specifically posting an aesthetic Instagram photo of herself reading Emmanuel Acho’s Uncomfortable Conversations With a Black Man, to be lacking. Said the former Bachelorette on the Bachelor Happy Hour podcast last week, “Vapid is the word that comes to mind.”

Speaking of Emmanuel Acho, the author and former NFL player is now set to fill in for Chris Harrison during the upcoming Bachelor finale this month, where he will reportedly “sit down with Bachelor Matt James to discuss his season, his final decision and where he is now, as well as cover the current events about the franchise.”