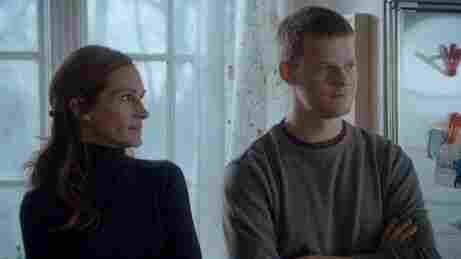 Hey-La, Hey-La: Holly (Julia Roberts) keeps a watchful eye on her son Ben (Lucas Hedges) in Ben is Back.

When movies go wrong, it usually happens gradually, a slow devolution borne of a series of missteps or a conceit that couldn’t be sustained over the long haul. With Ben is Back, the shift is remarkably sudden, like Wile E. Coyote speeding off the edge of a cliff, hovering for just a second, and then plummeting into the canyon below.

What begins as a wrenching study of opioid addiction, about a mother who never runs out of second chances for her son, ends in a tour of the upstate criminal underworld. It’s like watching You Can Count On Me spliced together with the last two reels of In the Bedroom. There are two qualitatively different movies here, connected by a missing dog.

When the dog is fine, so is Ben is Back. Writer-director Peter Hedges, who specializes in the middle-class seriocomic portraiture like Pieces of April and Dan in Real Life, raises the stakes higher than usual this time, because here any notions of family togetherness are a distant fantasy. Hedges’ hugely talented son Lucas, whose made a powerful impression in Manchester By the Sea and Lady Bird, has a childlike vulnerability that’s just right for the role of Ben Burns, a 19-year-old opioid addict who’s exhausted the patience and faith of all but one person in his life. When he turns up unexpectedly to the family home on Christmas Eve, his mother Holly (Julia Roberts) quakes with excitement while his sister Ivy (Kathryn Newton) furtively sends emergency texts to their stepfather (Courtney B. Vance). This is bad news.

Ben excels at storytelling, which allows him to spin the fictions necessary to deceive his mother and himself — though in both cases, they have a powerful desire to believe them. His latest tall tale deftly obfuscates the dubious assertion that his sponsor thought he was doing so well at rehab that he could go home for Christmas. Though Holly laughs along with his silly anecdote about hitching a ride, she sets some hard ground rules for him, including a 24-hour limit to his stay, an immediate drug test, and the condition that he stay in her sight at all times. She’s not done making excuses for him, especially when she has to combat her husband and daughter’s skepticism, but she’s not naive to his schemes or his gift for manipulation. Getting to the next fix has often called for clever improvisation.

The first half of Ben is Back feels like a painfully authentic vision of late-stage addiction, when an enormous amount of damage has been done and the chance for recovery seems infinitesimal. As Holly, Roberts is a heartbreaking picture of maternal devotion, because she fully realizes that her indulgence enables him, but she can’t simply let him fall into the abyss. Hedges’ performance makes it easy to see why she keeps trying: There are still flashes of the lively and clever-witted young man under all that need, and when he can’t hide his sickness any longer, it only intensifies her instinct to protect him. Being around his house, his neighborhood, and, in one particularly harrowing stretch, the shopping mall, confronts him with triggers he’s too fragile to withstand.

This is all great material, dealing head-on with the tortured parent-child addiction dynamics that are too often packaged in montages in the recent Beautiful Boy. But then the Burns family returns from Christmas Eve mass to find their dog missing and a much less persuasive film takes over. This film is about Ben reckoning with his past decisions and all the former friends and drug dealers who have old scores to settle with him. Holly joins him on this nocturnal odyssey through Upstate New York’s heart of darkness, but the specificity of Ben’s struggles at home are lost to a gallery of stock burnouts and lowlifes. This is the type of world Liam Neeson normally shoots his way through. It seems mostly divorced from a recognizable reality.

Even in its disappointing stretches, however, Ben is Back hints at a better film about how small-town America has sparked and sustained the opioid crisis through community institutions, like the friendly neighborhood doctors and pharmacists who run prescriptions for dangerous painkillers. A great high-profile opioid drama is long overdue, given the enormity of the problem, but before it drops off the cliff, Ben is Back is a useful roadmap through one of the drug-ravaged sites currently pockmarking the country. It takes a village to raise an addict.