After a year of speculation, the unthinkable has just been confirmed, Disneyland is ENDING its Annual Passholder Program effective immediately. Passholders will be contacted today and informed that they will be refunded the unused portion of their annual pass contract automatically. 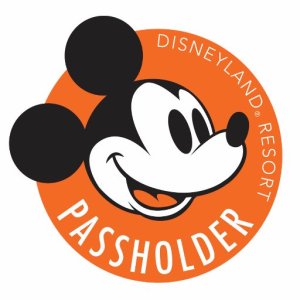 Back in October of 2020, we shared information that Tokyo Disneyland was ending its Passholder program due to limited park capacity and the difficulty of guaranteeing park reservations for passholders. At the time, we speculated that the same situation may need to happen at Disneyland as well.  Today, that suspicion was confirmed.

Ken Potrock, Disneyland Resort President, is in the process of sharing the following letter with all current passholders. The letter explains the reason for the sudden change, addresses what a huge impact this will be for many, and hints that more information is yet to come. 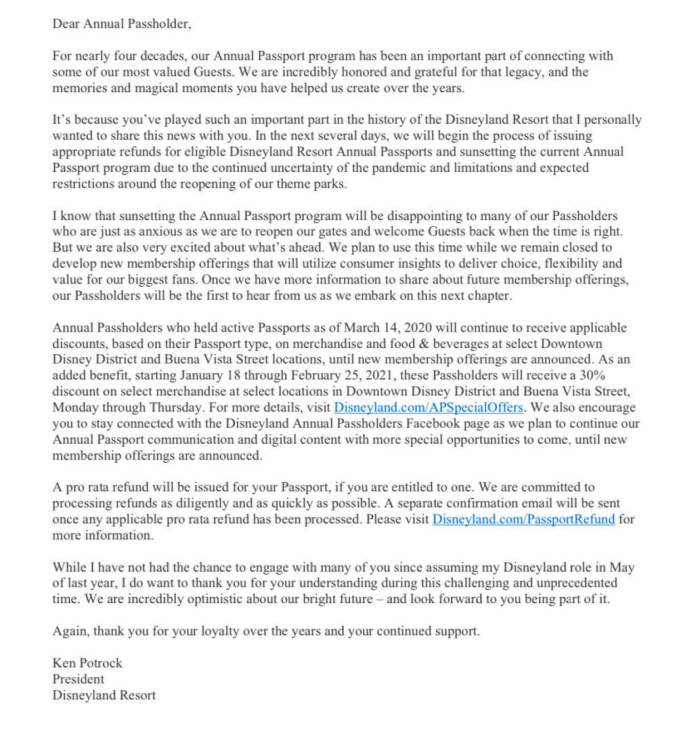 The truth is that Disneyland really wouldn’t have been able to uphold their end of the annual pass contract for an unknown number of months after the parks reopen due to expected drastic park capacity limitations. And while Disneyland hasn’t created their new ticket structure yet (they are busy sending surveys right now to figure out what guests want), they know that folks would rather have the guarantee of buying a ticket and gaining access than paying top dollar for an annual pass and not being guaranteed access for something they already paid for. 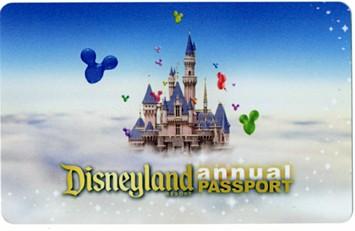 As a result of the high number of passholders and the low amount of expected park capacity, something drastic had to be done. But don’t despair just yet. Disneyland knows that many of you identify with the parks. It’s an important part of your lifestyle and the thought of not having access is probably causing some tears (or even anger) by those of you reading this. So Disneyland hopes to embrace the fans, continue to offer perks and opportunities, but have a new flexible ticketing structure that will allow Disneyland to control park access, and better serve guests in these difficult times.  What the exact ticketing structure will be isn’t finalized yet. But it will likely be incorporated into the new park reservation system.

First, and most importantly, you will automatically receive a prorated refund for the number of unused days on your annual pass. If you are curious how much that amount is, you’ll be able to visit Disneyland’s Passport Refund Page which will calculate your refund due. 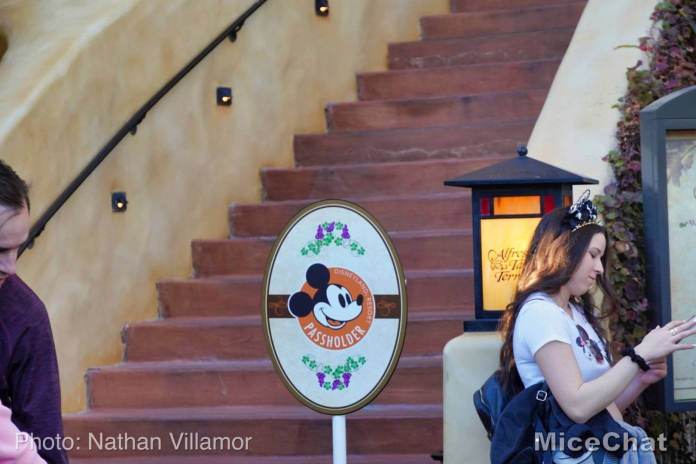 Premiere Passes will continue to work at Walt Disney World through April 30th. Guests can convert their Premiere Pass into a WDW pass by that date. You can contact Passholder Support at 407-939-7277 for assistance.

Club 33 members will receive alternate access to the Disneyland parks when they reopen and will continue to be able to visit Walt Disney World as long as they remain a member. The club will communicate new ticketing options with members when that information becomes available.

DISCOUNTS: But even with all Disneyland passes canceled, if you had an active park pass as of March 14th 2020, when the Disneyland Resort shut down, you will continue to receive some benefits. Passholder discounts will continue for the time being at Downtown Disney and Buena Vista Street. AND from January 18th through February 25th passholders will receive 30% off at select locations in Downtown Disney and Buena Vista Street Mondays through Thursdays (regular discounts still apply Friday through Sunday).

Disney promises to make sure passholders are the first to hear about the new ticket program as soon as it has been finalized. We’ll be sure to break it down for you and explain the changes right here on MiceChat as well.

We had a few moments to chat with Disneyland Resort President Ken Potrock about these changes. It was quite clear that he both understood and was concerned about how these changes would make passholders feel. On the one hand, Disney has done everything it could to grow the program over the decades and make passholders feel special, but current business demands would make delivering the same level of access impossible in an age of social distancing and extreme park capacity limitations.

Ken is committed to creating new ways to engage Disneyland’s best fans and make sure they continue to feel connected. Nothing is off the table right now as they try to figure out exactly what fans want, and how Disneyland can deliver it under very challenging circumstances.

If you have ideas about things Disney can do to help you feel the Magic once the parks reopen, please be sure to share in the comments below. Wanting a Passholders program just isn’t possible at the moment, but there are surely things Disney can offer, clubs, special ticketed events, fan merchandise, etc. that will help keep that sense of connection with Walt’s original Disneyland.

In October 2020, we ran a poll asking if the Passholders program should be ended as it has been in Tokyo to allow Disneyland to better control park capacity. We were shocked by not only the number of votes and views, but also by the results.

At the time, over 72% of you voted for some version of ending the program. Only 19% said the program should not be ended or changed. 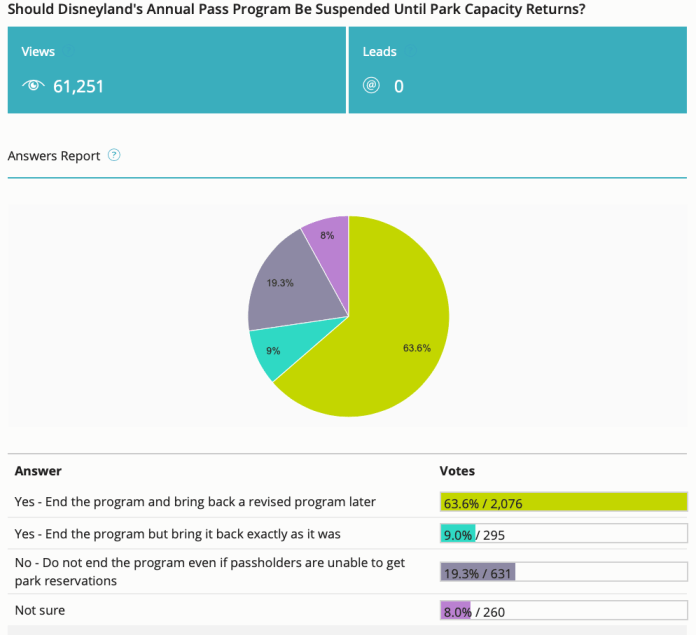 The question now is how would you like park tickets to be handled when Disneyland reopens? Should dated tickets simply be offered on a sliding price scaled based upon demand? Would you like to be able to buy vouchers discounted by the number you purchased (which would later need to be scheduled in the parks reservation system)? Should the park be the same price on every day or do you like a sliding scale? Should park hopping be allowed, or should the parks require separate admission for now? Let us know your thoughts below.

Let’s Hear From You

As a nearly life-long Passholder, this news made me personally feel very emotional. While I’ve been expecting exactly this news for several months, Disneyland is still a very important part of my life (the fact that I run this blog is testament to that), but I DO understand the very difficult position Disneyland is in. I’d like to think that this reset will allow Disneyland to address conditions which caused oppressive park overcrowding whenever anything new was introduced (everything from a new popcorn bucket to the opening of a new attraction would cause the park to come to gridlock at times). Regular guests were increasingly finding the park no fun to visit because it was just too crowded. There’s potential here for Disney to fix that with a limited number of tickets available on any given day.

The rapidly rising cost of annual passes had been making the renewal decision harder and harder for many. $1,450 for a pass with no blackouts just last year. So, many of you had already given up your passes and switched to taking advantage of special ticket offers instead. 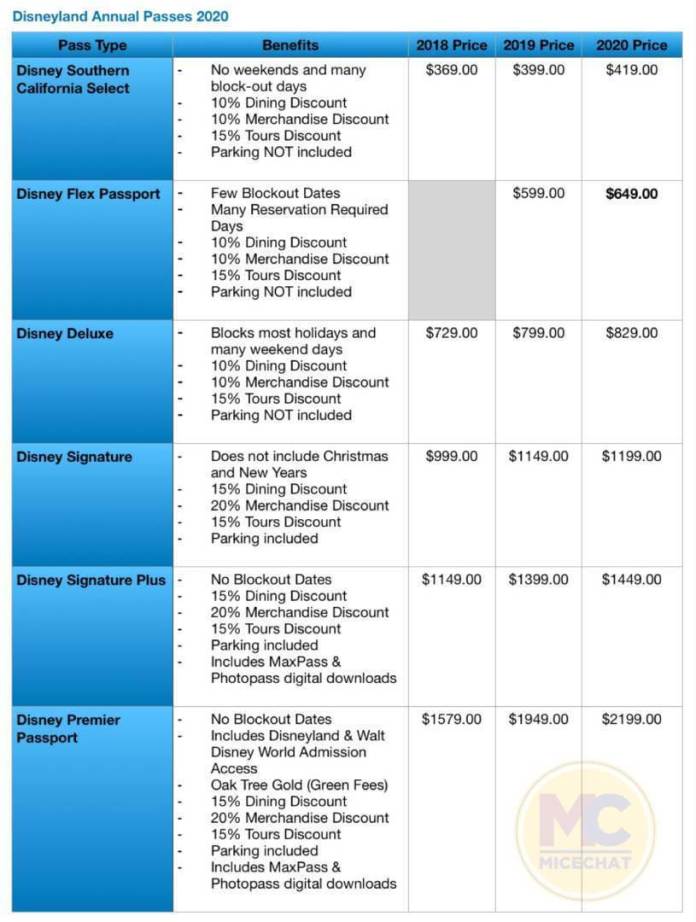 Would I be willing to buy tickets only when I need them? Yes. But I do want to see some sort of discount for people who visit more than just once a year, or perhaps just discount ticket offers for locals at times of lower attendance.  And I’d eventually like to see Disney bring back a version the FlexPass, which still allows the park to limit the number of visits through scheduling.

Let’s hear from you folks. How do you feel about this news? What can Disney do to keep you engaged? And how would you like to see tickets handled in the near future? 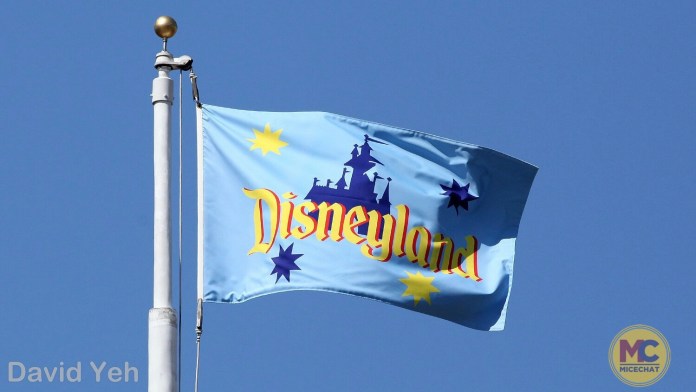