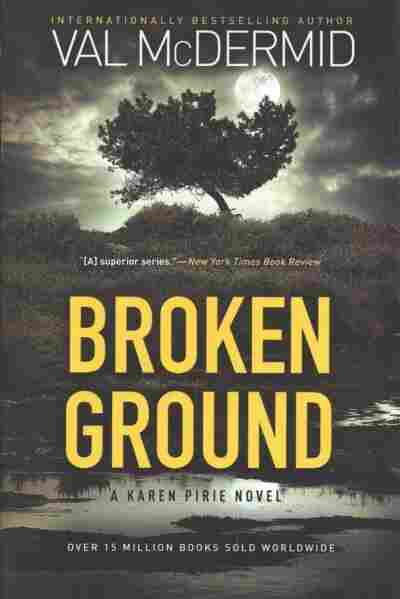 But you won’t read any police procedurals set in the United Kingdom featuring a female protagonist that are better than the ones Val McDermid writes, and that’s because her DCI Karen Pirie books manage to balance all of the above elements — and more — with great compassion and elegance. (McDermid, it should be noted, has three other series among more than 30 novels, one starring Lindsay Gordon and the others Kate Brannigan and partners Tony Hill and Carol Jordan.)

Buried Ground, her fifth Pirie novel, finds the hardworking, slightly frumpy Edinburgh-based detective in mourning and at sea. Grief has winnowed her weight and given her insomnia that she copes with by long night walks; she’s fitter physically than she’s been in years, but foundering mentally. Unfortunately, her new boss, Assistant Chief Constable Ann Markie, has sniffed out Pirie’s weakness and, determined to exploit it, saddled her with a new deputy, Detective Sergeant Gerry McCartney, whose hardbitten city nous scarcely conceals his own ambition.

As the emotionally battered Pirie is already wellies deep into a Highland bog, investigating a 1990s corpse discovered in a 1940s cache of motorcycles, she fails to foresee the trouble DS McCartney is planning. She’s also drawn to Hamish MacKenzie, the crofter on whose land the cache was found. Could the swoonworthy MacKenzie — not only does he look like a film star, he makes an excellent cup of coffee — be a swindler and a murderer? And what was American Alice Somerville’s grandfather Arnie up to anyway when he sent her on a chase after the buried bikes?

Of course all will be revealed — the difference in the doing, McDermid-style, involves developing location, character, and props in perfect proportion. Many novelists tell you that Edinburgh feels small; McDermid creates that feeling, through someone reminding a friend that a café is just across the street, or by taking a walk of only five minutes. And she allows Pirie to care deeply about food without being a foodie (somehow the old police business of coffee and donuts works here, instead of seeming as stale as a week-old Dunkin’ cruller).

McDermid, known as “The Queen of Crime,” doesn’t really need her work reviewed again. Her books consistently satisfy, after all. But the reason critics continue to cover her output is due to the fact that those books consistently challenge: The status quo, the patriarchy, complacency, Western ignorance, you name it. Like her fellow Scot Ian Rankin, Val McDermid knows that Edinburgh may be physically small, but it’s still constantly expanding through contact with the outside world.

Which is what makes the plot device perfect. Unlike authors who might “Insert World War II Here” simply to grab readers, McDermid uses her war story as a means of weaving in bits of forgotten history, whether it’s that the Canadians liberated Antwerp (who knew?), or that Scotland’s Jedburgh Castle-trained Special Operations troops included Allies of many nationalities. She reminds us again and again, even through characters’ love for Italian pastries, that Scotland is no isolated bastion.

DCI Karen Pirie understands that life is all about balance. Wonderfully, her creator Val McDermid knows that the best mystery novels are, too.

Pirie knows this, and delights in her city’s diversity. Her belief in civil rights for immigrants has resulted in one couple’s small-business success. It’s part of what’s behind her sometimes maddening righteousness when Markie repeatedly tells her to play the police department political game. You know that Pirie’s response will be to invent new rules — she isn’t interested in having Edinburgh, her employer, or anyone else stay the same. Pirie doesn’t care about politics, or looking bandbox fresh for press conferences. She’s only interested in truth and justice and her daily quota of fresh, hot coffee.

You might throw in a scone, too, but it won’t get you far. Pirie has trained herself well to distrust kindness. After a second dinner out with a possible love interest, she mistakes real attraction for sycophancy. She no more wants to be flattered than do any flattering, yet her brusque, terrier-like outbursts come from a real woman, a real human being. And that real human being believes in the humanity of others, too. After keeping her assistant late on an investigation, she gently hectors him into having the courage to ask his girlfriend out for a late drink. DCI Karen Pirie understands that life is all about balance. Wonderfully, her creator Val McDermid knows that the best mystery novels are, too.

Bethanne Patrick is a freelance writer and critic who tweets @TheBookMaven.