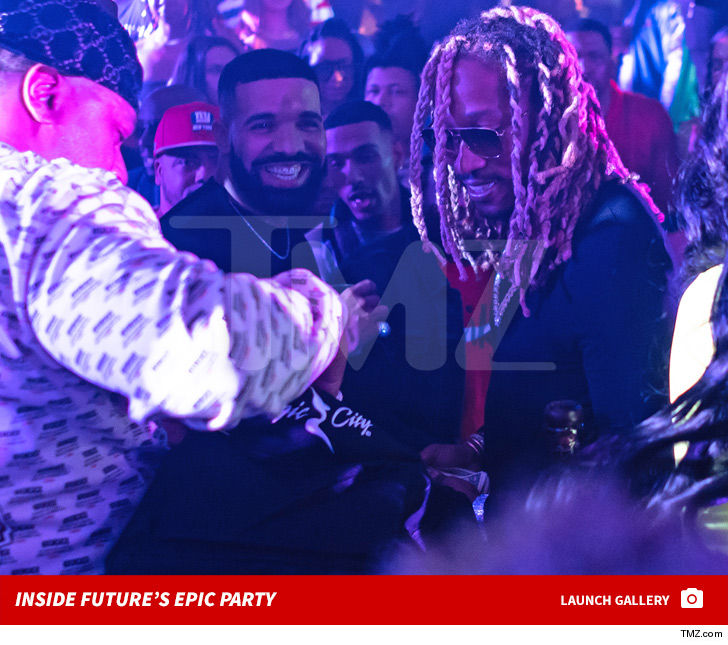 Future and Drake turned ATL’s famed Magic City strip club into “Future City” for the rapper’s birthday, but the party was cut short when a report of gunfire brought cops to the scene … TMZ has learned.

Sources say Future and Drake’s invite-only party brought in rappers Lil Yachty, Jacquees, Pastor Troy, Casino, MJAE The Great & 550 and Atlanta Falcons stud Julio Jones. Solid guest list and they pulled out all the stops with the 3 Bs — tons of booze, booty-shaking and bands of cash.

We’re told Drake literally backed up an armored truck to deliver six figures … to make it rain on the strippers. Throw in 30 bottles of Hennessey, 30 bottles of Don Julio and another few thousand for Indaglow Productions to rebrand the club, “Future City” — and ya got all ya need for the party of the year.

One problem though … Atlanta PD responded at 3 AM to reports of fighting and gunfire. We’re told officers found no evidence to support the gunshot claim, but the vibe was definitely killed and people started clearing out.

Check out the pics and video, though — it was crazy fun while it lasted!