1:07 PM PT — Attorneys for the Brooks family, L. Chris Stewart and Justin Miller, tell TMZ … while they are “disappointed that his killer was granted bond today, they understand that this is just one step in the long quest for justice for Rayshard.”

They add … “We will be diligent in our pursuit of justice for this family and will do everything in our power to make sure that Rayshard Brooks did not lose his life in vain.”

12:54 PM PT — Judge Jane C. Barwick has granted bond for Rolfe, and set it at $500,000. Half of that amount is a $250k straight bond for the felony murder charge, and the other half is a combination of bonds for all of his other charges.

The judge also imposed Rolfe’s conditions — he must surrender his passport, wear an ankle monitor, obey a curfew, and he’s to have no contact with Brooks’ family or any other witnesses or alleged victims in the case. He must also not communicate with any Atlanta police officers.

As for the phone passcode requested by the State … Judge Barwick says that’s for another hearing, but made a point to get Rolfe’s lawyers to agree that all phone evidence must be preserved.

12:36 PM PT — Brooks’ widow, Tomika Miller, delivered an incredibly emotional impact statement during the hearing, saying her life has been completely turned upside down since her husband was killed … she can’t eat, can’t sleep and can’t console her children. 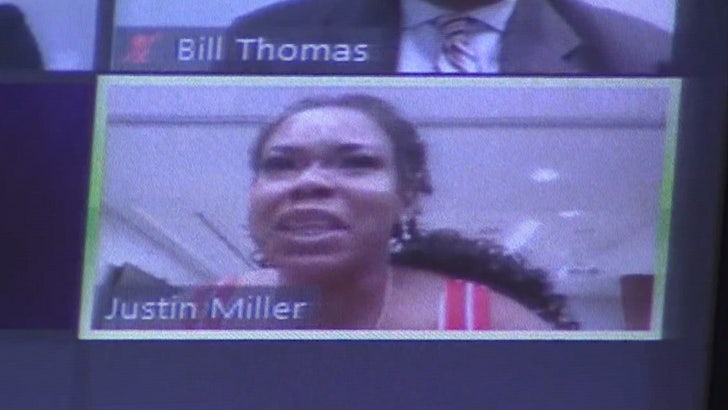 Miller says Brooks did not deserve to die, and her family has suffered so much emotional harm since his life was taken … and she should not have to wait in fear while Rolfe is out of custody awaiting his trial.

For that reason, she’s asking the judge to deny Rolfe’s request for bond, saying … “Mentally, I am not able to handle it.”

As for the proposed bond … Rolfe’s lawyers are asking for a $50k signature bond similar to what Brosnan got.

The state wants it set much higher. It’s recommending bond of $1 million with several conditions — Rolfe must disclose his location and who he’s living with, he must give up the passcode to his phone, he must have no contact with any officers involved in the case, he must turn over communication with other officers, he must wear an ankle monitor, he must adhere to a curfew, he’s to possess no weapons, and he’s to have no communication with Brooks’ family or any witness.

The defense has issues with several of those conditions, but did say Rolfe would be willing to turn over his passport to ease any concerns of him fleeing.

Garrett Rolfe — the fired Atlanta PD officer charged with felony murder for the fatal shooting of Rayshard Brooks — might be released from jail Tuesday … TMZ’s live streaming his bond hearing.

Rolfe has been holed up at the Gwinnett County Jail in Georgia since his arrest, but will be appearing virtually at the Fulton County courthouse Tuesday to ask the judge to be let him out on bond. The hearing’s scheduled for 11 AM PT.

According to legal docs … Rolfe is asking to be granted a “reasonable bond” for a few reasons. First, he claims he’s a “longstanding, law-abiding” citizen, and says he poses no threat to the public or potential witnesses.

Next, Rolfe claims there is “significant evidence that proves he was legally justified in using deadly force in this case.” In the docs, Rolfe argues that Brooks committed multiple felonies “in resisting lawful arrest” — including firing the TASER at him — and Brooks’ actions justified Rolfe’s use of deadly force “if he reasonably believed that Mr. Brooks possessed a deadly weapon.”

He claims the Fulton County District Attorney Paul Howard “has declared that a TASER is a deadly weapon under Georgia law.”

Finally, Rolfe argues he should be granted bond so he has an opportunity to help his lawyers prepare for the case, adding the D.A. “made several important factual misstatements to the public.”

Rolfe’s legal team is also expected to present character witnesses to testify that the former officer is a good man and will not present a flight risk. Some experts predict the judge will grant some sort of bond … but at a steep price.