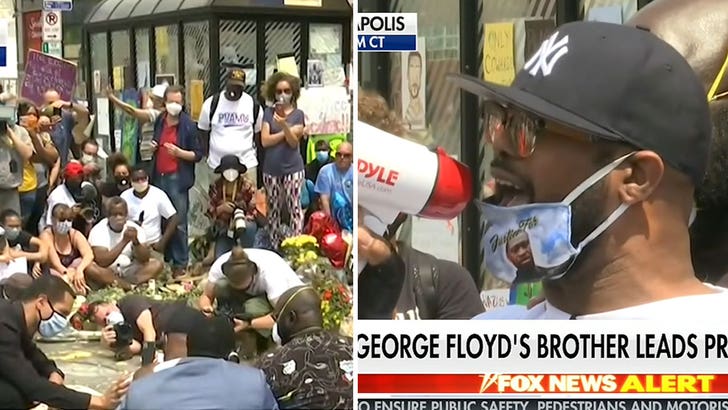 Here’s George Floyd‘s brother delivering a powerful message at the site of his murder … calling for peace, love, non-violent protest, activism and an end to the riots and looting.

George’s younger brother, Terrence, took to the bullhorn Monday and addressed a huge crowd of protesters gathered at the scene of his fatal interaction with Minneapolis police, getting emotional as he decried the looters and rioters he says are soiling the fight for justice.

Terrence says the riots and lootings happen every time people try to protest and make their point, and he says it sets everything back and overshadows the non-violent demonstrators trying to affect positive change.

As you know … violent clashes with police and looting have marred protests across the country, with some folks carrying out the brazen acts in broad daylight, and all hell breaking loose under nightfall.

Wearing a face covering with an image of his late brother, Terrence also called for peace and led the crowd in chants calling for the other police officers involved in Floyd’s fatal arrest to be arrested and charged.

As we reported … ex-cop Derek Chauvin, who kneeled on George’s neck for over 8 minutes, has been charged with 3rd-degree murder and manslaughter in Floyd’s death. He was effectively on suicide watch and has been moved to a maximum-security prison.

After sharing his message at the site of his brother’s final breaths, Terrence led the crowd as they marched and chanted through the streets of Minneapolis.