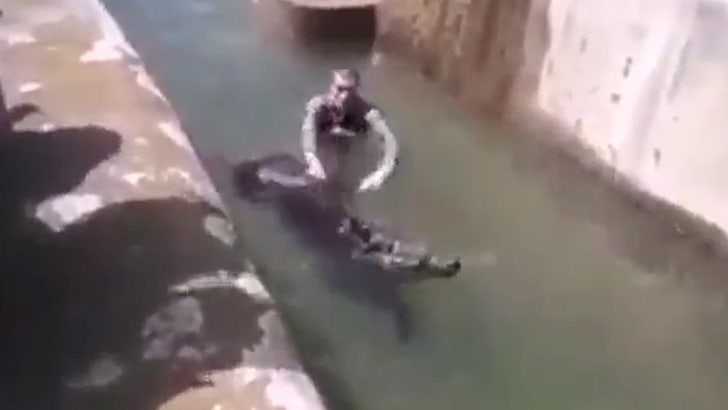 A man who was allegedly drunk broke into a bear exhibit at a zoo in Poland and tried to drown the massive beast in front of tons of horrified onlookers … and it’s all on video.

The wild scene went down at the Warsaw Zoo, where a 23-year-old man was filmed trying to shove the bear’s head underwater as they struggled in the enclosure’s moat.

The insane video picks up with the man inside the exhibit, and the bear charges at the guy, who jumps into the water. The bear eventually makes its way into the moat as well, and then all hell breaks loose.

You see the guy shoving the bear’s head underwater with both hands, putting all his weight on the captive animal as he tries to keep the bear submerged. After a struggle, the bear seems to give up and the guy lets go and climbs out of the water.

It’s kinda sad … the zoo says the bear, Sabina, is an elderly animal who was rescued from a circus, and it’s not the first time she’s been attacked. The zoo also says the bear was not physically hurt, but was mentally stressed and nervously growled in the water until zookeepers arrived.

The guy is now facing prosecution for the incident, and the zoo say it will take all legal steps to bring him to justice.

Jake Paul in the Middle…