Latest News
Home /More than 400 lawsuits filed in New York courts as part of new child sex abuse law
The New York Child Victims Act, which was signed into law on February 14, created a one-year period when any adult survivors of child sexual abuse can sue an abuser or a negligent institution, no matter how long ago the abuse took place. That period began on Wednesday.

The state court system was expecting so many lawsuits that 45 judges have been set aside to deal exclusively with the influx of cases, Chalfen said.

The designated 45 judges, including 12 in New York City, make up just a fraction of the state’s 1,350 paid judges, but they are preparing for an “influx” of lawsuits, Chalfen said. Lawsuits are expected to be filed against the Archdiocese of New York, Jehovah’s Witnesses, Rockefeller University, the Boy Scouts, Jeffrey Epstein and others on Wednesday.

“The revived Child Victims Act cases are critically important cases, raising numerous challenging legal issues, that must be adjudicated as consistently and expeditiously as possible across the state,” Chief Administrative Judge Lawrence K. Marks said. “We are fully committed to providing appropriate and sufficient resources to achieve that goal.”

The idea behind the law is that many victims of child sexual abuse keep it a secret for years, well beyond the previous statute of limitations, out of shame and fear. 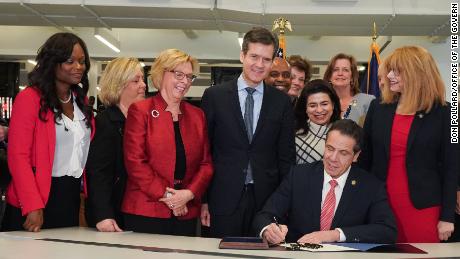 The law firm Weitz & Luxenberg said it has 1,200 clients across the state expected to file child sex abuse lawsuits, according to spokesman Nick Palladino. Only about 10 of those will likely be filed on Wednesday because of the “sheer volume” of lawsuits, he said.

Mitchell Garabedian, who filed a lawsuit on behalf of a man who says he was sexually abused by former US cardinal Theodore McCarick, said it was a day of reckoning for a number of institutions.

“I’ve been waiting years,” the man, James Grein, said Wednesday. “I’ve suffered many, many years. And this last year has been tremendously up and down and I’m just joyful for the day today.”

The Vatican dismissed McCarrick in February after a church trial found him guilty of sexually abusing minors.

Jeffrey Lena, who has represented the Holy See in US courts, declined to comment.

The director of communications for the Archdiocese of New York, Joseph Zwilling, said the archdiocese had been anticipating today’s legal actions.

“The Archdiocese of New York has been anticipating the filing of lawsuits since the Child Victim’s Act passed earlier this year, even as we continue to invite people to consider our successful program to bring compensation quickly to qualified claimants through the archdiocesan Independent Reconciliation and Compensation Program,” he said.

“While we carefully review the claims made in these suits, we ask that people pray for peace and healing for all those who have suffered from the sin and crime of the sexual abuse of minors, wherever it occurred, particularly victim-survivors and their families.”

“The sheer volume of lawsuits filed today is both simultaneously heartbreaking and encouraging,” they said. “It is indicative of just how deep-rooted the problem of child sex abuse is in our country.”

What the law changed 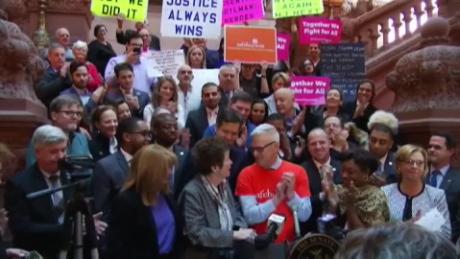 Despite Jeffrey Epstein’s death on Saturday from an apparent suicide, the civil lawsuits can continue against the multimillionaire’s estate, legal experts said.

Attorneys for Jennifer Araoz, who said she was raped by Epstein, have filed suit against his estate, Ghislaine Maxwell and three Jane Does referred to as the “recruiter,” the “secretary,” and the “maid.” The lawsuit alleges that they conspired to maintain and conceal a sex trafficking ring in which Epstein sexually abused and raped her when she was 15. 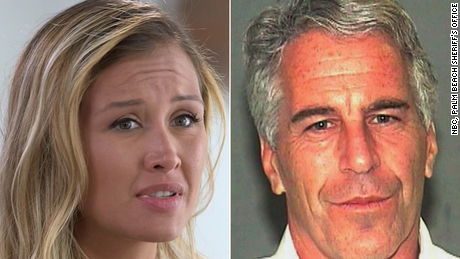 “Fortunately, New York’s Child Victims Act now affords survivors like me legal recourse,” Araoz told reporters Wednesday. “Today I am exercising my rights under that law. Today I am starting to reclaim my power.”

The one-year reprieve for civil lawsuits applies to accusations of child sexual abuse, including those that had been previously dismissed for being filed too late or for those who failed to file a notice of claim in time.

“It’s a way for victims to take matters into their own hands,” said attorney Carrie Goldberg said. “It gives them a path to justice.”

New York Gov. Andrew Cuomo signed it into law in February, and on Wednesday, he reiterated its importance.

“Child sexual abuse is a real epidemic. It’s been in the corners and in the shadows, but it is much more widespread than people want to admit,” Cuomo said in a statement.

“The Child Victims Act says if you were sexually abused as a child, you have a right to justice and to make your case. Children have legal rights, and if you abuse a child, you’re going to have your day in court and you’re going to be called to answer for it.” 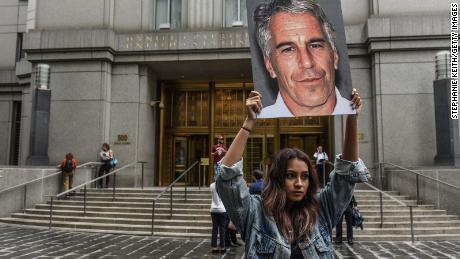 The law was signed after more than a decade of opposition from the Catholic Church in New York, Cuomo said in February. He added that the law’s passage was “society’s way of saying we are sorry.”

In addition to the one-year window, the act makes several other changes, expanding child victims’ ability to pursue justice in their cases through the legal system.

The new law allows survivors of child sex abuse to file a civil suit until their 55th birthday, an increase from the previous age limit of 23. And it also extends the statute of limitations for child sex abuse charges, up to 28 years of age for certain felony charges and up to 25 for misdemeanor charges.