House Speaker Nancy Pelosi, D-Calif., decried on Saturday what she described as a “racist” attack by President Trump on Rep. Elijah Cummings, D-Md., — after the president called the chairman of the House Oversight Committee a “brutal bully” and said his Baltimore district was “more dangerous” than the southern border.

“Rep. Cummings  is a champion in the Congress and the country for civil rights and economic justice, a beloved leader in Baltimore, and deeply valued colleague,” she tweeted. “We all reject racist attacks against him and support his steadfast leadership.”

Pelosi, who was born in Baltimore and is the daughter of a former mayor of the city, was responding to tweets by President Trump earlier Saturday in which he criticized Cummings, and called his district a “disgusting, rat and rodent infested mess.”

“Rep, Elijah Cummings has been a brutal bully, shouting and screaming at the great men & women of Border Patrol about conditions at the Southern Border, when actually his Baltimore district is FAR WORSE and more dangerous,” he tweeted Saturday morning.

Trump was apparently referring to Cummings’ questioning of border officials in his role as chairman of the House Oversight Committee. This month, he yelled at acting Homeland Security chief Kevin McAleenan for saying the department was doing its “level best” when it comes to the humanitarian crisis at the border. 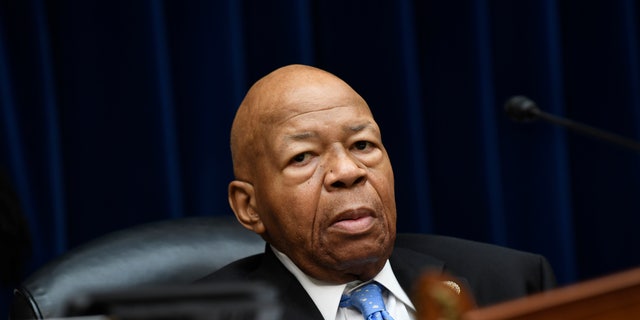 Trump said that detention centers at the border are “clean, efficient and well run, just very crowded” before saying “no human being would want to live” in Cummings’ district.

“Why is so much money sent to the Elijah Cummings district when it is considered the worst run and most dangerous anywhere in the United States. No human being would want to live there. Where is all this money going? How much is stolen? Investigate this corrupt mess immediately!”

Pelosi’s description of the tweets as “racist” is the latest race-related controversy over Trump’s weekend tweeting. Democrats this month condemned as racist an attack by Trump on four freshman congresswomen known as “The Squad.”

“Why don’t they go back and help fix the totally broken and crime infested places from which they came. Then come back and show us how it is done,” he tweeted.

The president later affirmed that he was referring to Reps. Ilhan Omar, D-Minn, Alexandria Ocasio-Cortez, Rashida Tlaib, and Ayanna Pressley — all of whom, except Omar, were born in the United States. Omar was born in Somalia but is an American citizen.

Cummings said last week on ABC News that there was “no doubt” that Trump is a racist. On Saturday, he responded to Trump’s latest outburst, but did not make any reference to racism — saying instead that it was his constitutional duty to conduct oversight of the executive branch, and his moral duty to fight for his constituents.

“Just yesterday, I held a hearing on the skyrocketing prices of prescription drugs and the financial hardships that families across the nation, and in Baltimore, are facing,” he tweeted.

He went on to say that he wanted to address the problem with Trump, and referred to a conversation they had in 2017 about legislation to lower drug prices.

Baltimore Mayor Bernard C. “Jack” Young, meanwhile, said in a statement that it was “completely unacceptable for the political leader of our country to denigrate a vibrant American City like Baltimore, and to viciously attack U.S. Representative Elijah Cummings a patriot and a hero.”

“Mr. Trump’s rhetoric is hurtful and dangerous to the people he’s sworn to represent,” he said.

Fox News’ Gregg Re and Andrew O’Reilly contributed to this report.