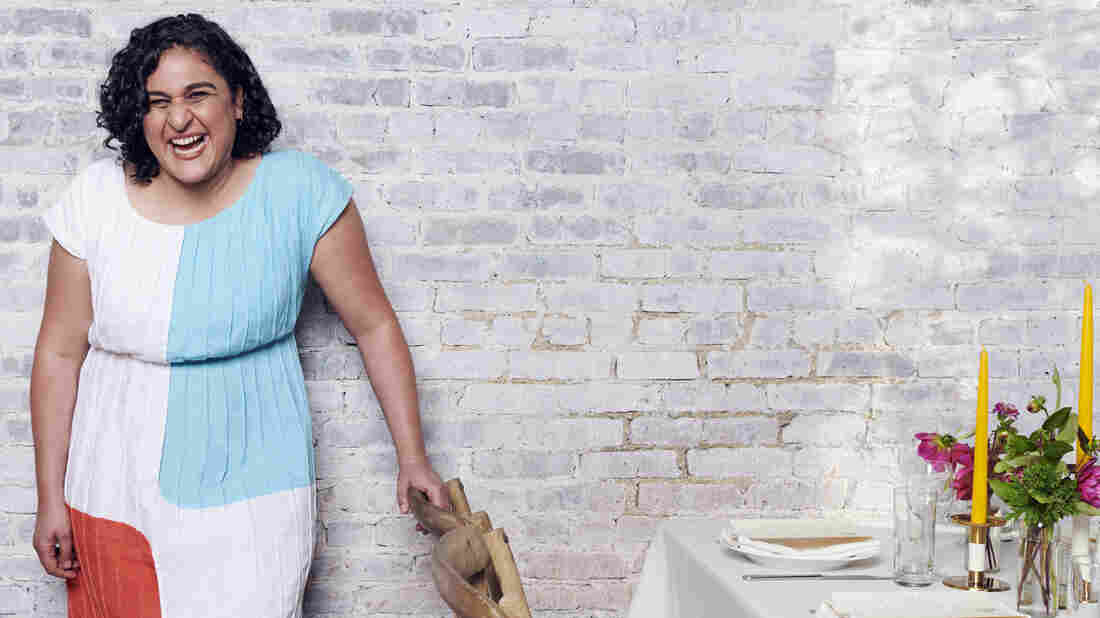 Samin Nosrat was 19 and a cooking novice when she ended up as an apprentice in the kitchen at Chez Panisse, Alice Waters‘ award-winning restaurant in Berkeley, Calif. There she watched the cooks whip up dishes without looking at cookbooks or relying on timers and she was struck by how little she understood about cooking.

“The gap of knowledge between where I was and where they were seemed uncrossable,” Nosrat says. “I didn’t even know the difference between cilantro and parsley.”

But over time, Nosrat noticed that the daily conversations the cooks had about different dishes seemed to center on the same elements: salt, fat, acid and heat.

“We always talked about how we had to adjust the salt or that something [needed] a little squeeze of lime — a little bit of acid,” she says. Other times, the cooks would adjust the fat in which something was cooked or the actual method of cooking.

This was an opportunity for me to elevate and honor home cooks, most of whom are women and have been women for the great part of human history.

Nosrat began experimenting on her own with these elements. She moved to Italy, then returned to Berkeley, where she was chef de cuisine at an Italian restaurant. Along the way, she met Michael Pollan and collaborated with him on his Netflix series Cooked.

Earlier this year, Nosrat won a James Beard award for Salt, Fat, Acid, Heat, a cookbook inspired in part by her early observations at Chez Panisse. Now she’s diving deeper, with a four-part Netflix show, also called Salt Fat Acid Heat, in which she travels the world to learn more about each element.

Nosrat describes the show as a celebration of good food — and of the women who are often responsible for creating it. “This was an opportunity for me to elevate and honor home cooks, most of whom are women and have been women for the great part of human history,” she says.

On how salt affects food

I think the simplest way that probably most of us can picture or think of is the example of a tomato. If you eat a tomato that you haven’t sprinkled salt on, it might taste a little bit bland or just a little bit watery. Once you sprinkle a few crystals of salt on a slice of tomato, some of the juices start to come out, you know? Osmosis starts. …

Aromatic compounds in vegetables are inside those watery cells, and so they come to the top. They’re more available for you to breathe in. You take a bite. It’s juicier, and so you have this taste experience that you wouldn’t — you couldn’t — have had without that salt. The salt really balances the acid in the tomato and the sweetness in the tomato and just makes it more tomato-y.

And that’s really true for certainly every vegetable, and I believe for meat, too. But to me, my mouth now at this point — salt is the first thing I sort of just instinctively taste for. And I can always tell if something needs a little bit more.

On how some salts are saltier than others

All salts are not created equal. So if I am using Diamond Crystal at home and I say one teaspoon, but you have just a box of iodized table salt, what you use will almost be equivalent to twice as much. So for some recipes, it’s not such a big deal, because maybe you’re just putting the salt in a pot of water, and it will spread out over a large amount of food or a volume of liquid or something. But if you’re making chocolate-chip cookies and you use twice as much salt, it could be bad news. So I think it’s really important, more than anything, to be familiar with your own salt and to really taste as you go, so you start to learn what one pinch or one spoonful will do to a pot of food.

On how fat transports flavor

While salt is all about enhancing flavor, fat is mostly about texture. But it’s also this amazing sort of transporter of flavor. It’s a carrier. A great way to sort of imagine that is if you think of a garlic clove. If you set up two pans next to each other, and you put water in one, and olive oil in another one, and you just simmered one garlic clove in some water, and you sizzled a garlic clove in a little bit of olive oil, if you remove the cloves and throw them away, and then you dip your finger in the water and taste it, it’ll probably taste pretty much just like water.

But if you taste the oil, it’ll taste like this amazing perfume. An aroma of garlic will have fully penetrated and distributed itself around throughout the oil. And so now you have garlic oil. And if you think about that, that’s what fat does for so many of the aromatic compounds and flavors in our cooking — it distributes flavor.

So that’s why [when] we start a soup or stew, you put oil in the pan. And you put your onions in there. And if you’re going to add a bay leaf or some coriander seed or whatever, you throw that in at the beginning so it can sort of work its way into that oil and then penetrate your dish fully. So that’s one way that fat impacts flavor.

On how each culture has its own fat

If I was trying to make something that tasted Japanese at home, I wouldn’t use olive oil, because if I start with olive oil, that will permeate the whole dish, and it will never taste properly Japanese. So to make the thing taste of the place, start with the fat of the place.

On the importance of acid

I think for most home cooks and certainly most people who I have taught, it seems to be the [element] that’s kind of the biggest surprise, because even the word “acid” seems so clinical and scientific. I remember even as a young cook people would use that word in the kitchen. At first, I didn’t know what they were talking about. Then over time, I realized, “Oh, it’s just lemon, lime, a little vinegar, maybe a splash of wine or even a little goat cheese or feta cheese.”

Anything tart is acid, but acid is a thing, I think, [many] Americans haven’t necessarily created a language for it or a palate for it. A lot of other cultures really heavily believe in it. Often it comes through on the table in condiment form. So in Mexico [it’s] all of those salsas and cremas and cheeses and guacamole, all those things — or even just a wedge of lime that comes with your fish taco. That’s acid. My family is from Iran, so we have a very acidic palate. We squeeze a sour orange over almost everything or lime. There’s yogurt that we put on every meal. …

Balsamic vinegar, pickles and mustard and ketchup — which is why it’s kind of this delight for me, to make a really simple meal, like a bowl of rice and vegetables and a fried egg, and then be like, “OK, what am I going to put on it today? Is it going to be kimchi? Is it going to be nine kinds of hot sauce? Am I going to grate some cheese and put a dollop of sour cream?” Because in a lot of ways, even the most simple foods can just be elevated with a couple of condiments.

… in my experience, no two ovens are the same. Even my oven on different days acts differently

On how cooking in an oven requires vigilance

We associate [cooking in an oven] as this very straightforward and simple thing: You set the dial, you put something in there and then you come back 18 minutes later and it’s done. But in my experience, no two ovens are the same. Even my oven, on different days, acts differently. Depending on what the weather is outside, what the weather is inside, if your thermostat is old or new, if it’s accurate or not, how many times you’ve opened the oven door — a million different things will affect that temperature. Very rarely is that actual temperature in there the very specific thing to which you’ve set the dial. In fact, a lot of those thermostats have a plus or minus of up to 20 degrees. It’s crazy! You might set it to 350, and it might be anywhere between 330 and 370.

So we have this false sense of precision when we cook in the oven, but it’s actually in some ways the least precise form of cooking. So I think it gives you this false sense of, “I don’t need to pay attention,” so you turn down your senses and you’re paying less attention, and that is often where things go wrong. I watch my oven things like a hawk. I do set timers but mostly to remind me to move things around, because the back will always will be hotter than the front, and in my oven the left side is hotter. … So I rotate things, I move them up and down different racks. I’m always paying attention, so that I can know when the thing is done.

Heidi Saman and Seth Kelley produced and edited the audio of this interview. Bridget Bentz, Molly Seavy-Nesper and Maria Godoy adapted it for the Web.