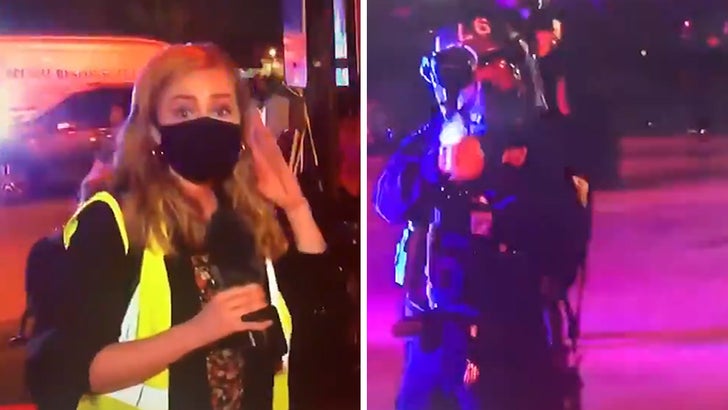 A reporter became a police target as she covered the protests surrounding the killing of George Floyd … getting hit with pepper balls live on air.

Protests erupted in cities across the country Friday night, including in Lousiville, Kentucky. Reporter Kaitlin Rust of WAVE was on the ground covering the events when a police officer intentionally opened fire on her and her camera operator, seemingly striking them both with pepper balls.

Rust was certainly not in any type of disguise — she was wearing a reflective vest, holding a microphone and not in a crowded group of people — so it begs the question … what the hell was the officer doing?

Luckily, Rust appeared to be OK and continued to broadcast from the scene.

As we reported … a police car was set on fire in Atlanta and The White House placed on lockdown as protests continued Friday.

Officer Derek Chauvin — who kept his knee on Floy’d neck for nearly 9 minutes while he died — was arrested Friday and charged with 3rd-degree murder and 2nd-degree manslaughter. The other 3 officers involved have not yet been arrested or charged.

Muhammad Ali Would Have Condemned…