Waves crash along the Juno Beach Pier as Tropical Storm Isaias passes through the area Sunday in Juno Beach, Fla. The storm is now headed toward the Carolinas. 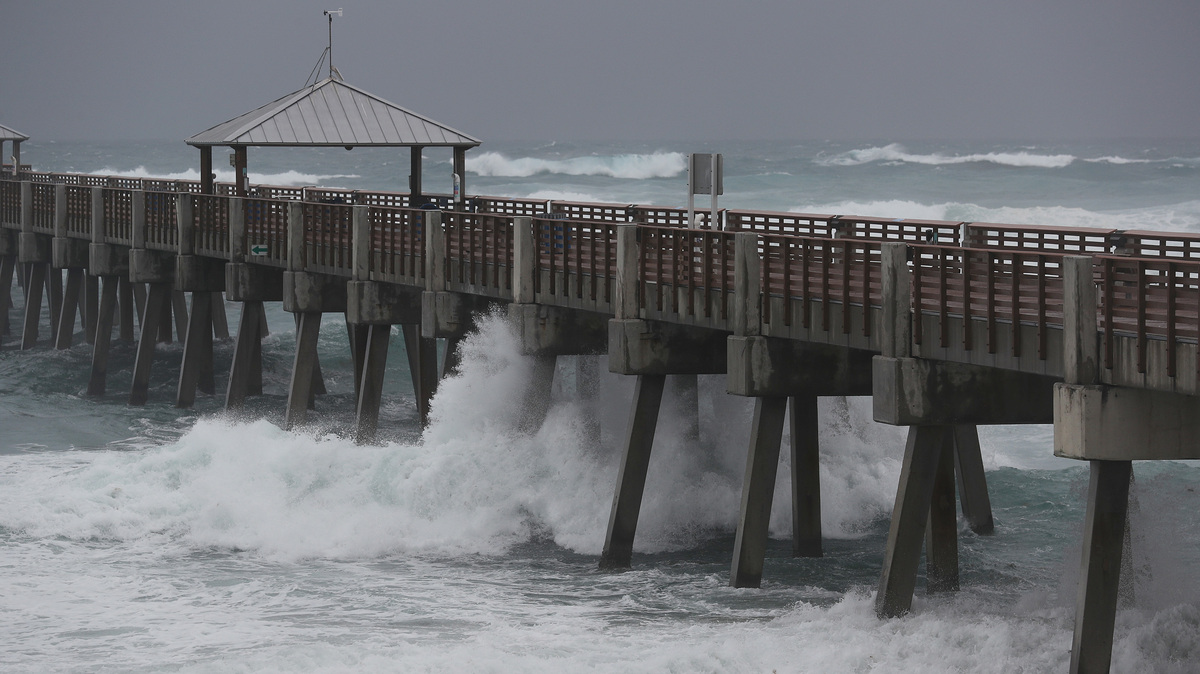 Waves crash along the Juno Beach Pier as Tropical Storm Isaias passes through the area Sunday in Juno Beach, Fla. The storm is now headed toward the Carolinas.

Tropical Storm Isaias skirted the east coast of Florida on Sunday and is now on track to hit the Carolinas Monday night.

As of 8:00 p.m. the National Hurricane Center said the storm was located about 55 miles southeast of Cape Canaveral, Fla. and 385 miles south of Myrtle Beach, S.C. Its maximum sustained winds have increased slightly to 70 miles per hour.

South Florida is emerging from the storm with relatively little damage, though local officials had braced for more serious damage including widespread power outages.

Between 2 and 4 inches of rain fell in some South Florida areas and the storm knocked out power for a few hundred people, according to the Miami Herald. Member station WLRN reported that Florida Power and Light had restored power to nearly 20,000 customers as of 9 a.m. Sunday.

Isaias, which was downgraded from hurricane to tropical storm over the weekend, is expected to be a “strong tropical storm” when it reaches the coast of eastern South Carolina or southern North Carolina on Monday night.

A hurricane watch and storm surge warning are in effect for portions of the Carolinas as of early Sunday evening, and a tropical storm watch is in effect for the U.S. mid-Atlantic coast.

Isaias could bring 1 to 8 inches of rainfall in areas from Florida to New England in the coming week, according to the National Hurricane Center.

It warned that “dangerous storm surge” is possible from the city of Edisto Beach, S.C. to Cape Fear, N.C. The center said water could rise between 2 and 4 feet above ground level along that stretch of coast in the next 48 hours.

The National Hurricane Center is forecasting “slow weakening” after the storm makes landfall and moves across the U.S. mid-Atlantic region late Monday and Tuesday.

Isaias is expected to remain a tropical storm well into midweek as it tracks up the East Coast. The NHC said that in addition to storm surge, much of the East Coast could see flash flooding and urban flooding as well as ocean swells and tornadoes.

And North Carolina Gov. Roy Cooper said on Sunday afternoon that he had declared a state of emergency and received a federal declaration of emergency for 25 counties. He urged residents to follow local evacuation orders and make a plan to seek shelter outside of the danger zone.

In a hurricane season further complicated by the coronavirus pandemic, Cooper said shelters in the state will screen people and direct those with symptoms to other locations accordingly.

“During the pandemic, your home has been the safest place, but that may change as Isaias arrives,” he said.