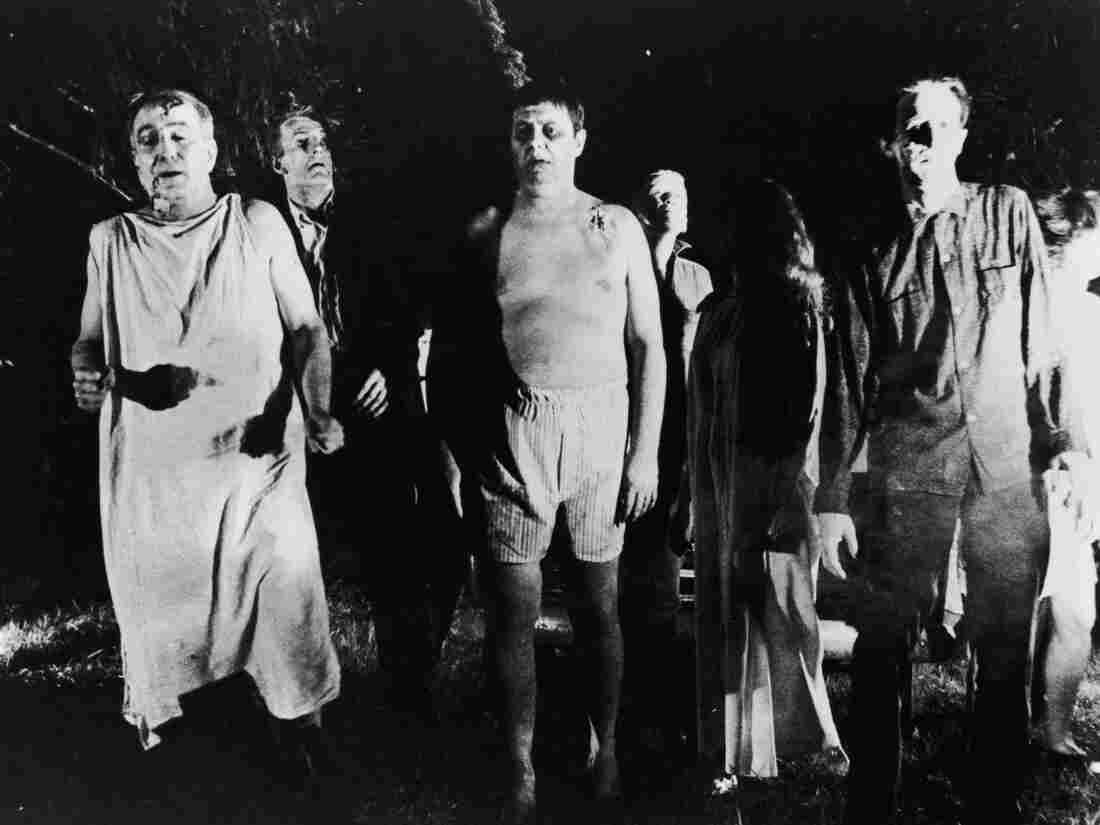 A line of undead ‘zombies’ walk through a field in the night in a still from the film, ‘Night Of The Living Dead,’ directed by George Romero, 1968. The film has been reissued for screenings on the 50th anniversary of its release.

A line of undead ‘zombies’ walk through a field in the night in a still from the film, ‘Night Of The Living Dead,’ directed by George Romero, 1968. The film has been reissued for screenings on the 50th anniversary of its release.

A few weeks ago, I drove three hours to reach a screening of the restored print of George Romero’s classic black and white zombie film. Sitting in the multiplex theater, I tried to put myself back in the mindset of someone seeing it fresh as the main characters, Barbara and her unnamed brother, find themselves in a cemetery.

“They’re coming to get you, Barbara,” he teases. “Look, there comes one of them now!”

What they don’t know is that an undead apocalypse is about to sweep America and Barbara’s brother is about to get eaten by a shambling ghoul. In 1968, theater-goers were also in the dark, with no idea they were seeing a game-changing film.

“It played on a double-bill, with — I think it was — Doctor Who and the Daleks,” said Stuart Klawans, a longtime film critic for The Nation magazine. “It really wasn’t expected to do anything.” In those days, people going to see a scary movie expected it to be pretty harmless, the kind of thing you went to on a date. But, Klawans added, this was not that kind of movie: “There’s really no sex appeal in Night of the Living Dead.”

That’s an understatement. In 1968 the horror genre was changing. With films like Roman Polanski’s Rosemary’s Baby and Ingmar Bergman’s Hour of the Wolf, directors were exploring serious questions, mirroring society in more provocative and disturbing ways.

What people got in Romero’s film was their very first glimpse of what we now think of as zombies: shambling undead who hunger for human flesh. They’re mindless and slow and kind of goofy looking, but nearly unstoppable. They just keep coming unless you destroy their brains.

Much of the film is presented in a kind of faux documentary style that heightens the anxiety. There is the sense that civilization itself is unraveling. 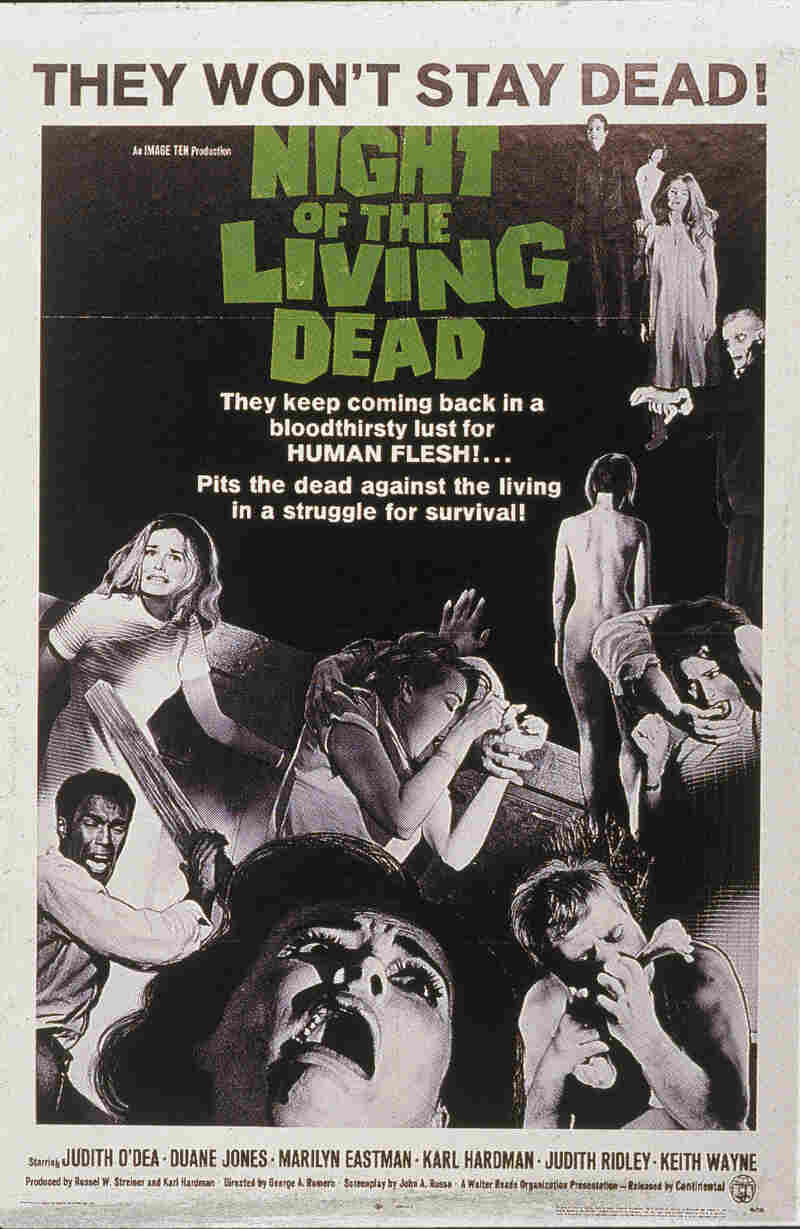 Movie poster for ‘Night of the Living Dead,’ directed by George Romero, 1968.

Movie poster for ‘Night of the Living Dead,’ directed by George Romero, 1968.

Speaking in 1988 with NPR’s Terry Gross, Romero said he was inspired by his own childhood fears during World War 2. “When I was growing up I actually went through in New York City blackouts when we had to close the windows and worry about air raids,” he recalled. “I don’t know whether those were realistic worries or not, but as a kid it was a very frightening experience.”

Romero, who died in 2017, said what made his movies interesting wasn’t the zombies, but the people reacting to them. “My stories have always been more about the humans and the mistakes they make. Zombies are just sort of out there.”

One way Romero kept the focus on the people in Night of the Living Dead was by casting an African-American actor, Duane Jones, in the lead role. His performance is raw and realistic as he fights to keep himself and Barbara alive. “Look, I know you’re afraid,” his character, who goes unnamed, tells her. “I’m afraid too.”

Romero always downplayed the decision to cast Jones, but it was revolutionary for its time. Film critic Stuart Klawans points out that Romero and Jones made the film over nine months at a time when racial tensions in America were exploding. “There was no such thing as being color blind in 1967 and 1968,” he said. “Not in a production that started in the wake of the Detroit and Newark riots, and pretty much finished with the assassination of Martin Luther King Jr.”

One of the most shocking things about Night of the Living Dead is that Jones’ character actually survives the zombies. He makes it through the night but is then killed by a group of white men — sheriffs’ deputies. They think Jones is one of the zombies. “Good shot,” the sheriff mutters. “Let’s go get him, that’s another one for the fire.”

It’s the most horrific moment in the film — Jones’ life and his body are treated as expendable. The foreshadowing of our current time, with the Black Lives Matter protests and the debate over police violence, is unsettling.

Klawans says, over the years that followed, the importance of Night of the Living Dead kept growing in people’s imaginations. In part that’s because it influenced wave after wave of other zombie movies, everything from Zombieland and World War Z to Game of Thrones and TheWalking Dead.

But as it kept being released and re-released, he thinks the film also kept reflecting the fears and anxieties of new audiences. “It soaked up the killings at Kent State, it soaked up the Tet offensive [in Vietnam]. So the film just took on more and more and more weight as it went on,” Klawans said.

One final surprise is that this B-movie made on a shoe string budget is beautiful. Sure there’s gore, but Romero also created lush black and white textures and fascinating visual compositions. “He started out as a student of visual arts, with a particular interest in Spanish painting. You can see that influence, it’s a very sophisticated film,” Klawans added.

The Museum of Modern Art issued a restored print of the film that’s been screening in in this 50th anniversary year in movie theaters round around the world. The zombie invasion continues.

The night I watched it at a late-night screening in Watertown, N.Y., I was the only person in the theater, which made it even more creepy.