When a new mom returned to work at Overlake Hospital in Bellevue, Washington, in 2014, she quickly realized pumping breast milk on the job was going to be an issue.

Taking a 15- to 30-minute break every few hours to pump added more to her already busy day. And the only space she was offered to express milk was also used as a consultation office for physicians and administrators. It didn’t have a lock or curtains on the windows. She put a small note on the door saying she needed privacy, but several times, other employees still barged in on her as she pumped.

Then, her supervisor cut her paycheck to deduct the time she needed to spend pumping milk ― whether or not she actually took that time. She was required to carry a phone at all times in case of emergencies and often had to return to work immediately, no matter how far along she was in her pump session.

Eventually, she developed mastitis, a painful breast infection that can result from not expressing breast milk effectively or regularly.

In September 2014, she made a complaint to the Department of Labor alleging violations of her rights as a nursing mother under the Fair Labor Standards Act. After a four-month investigation, the department found that her employer had violated her right to adequate space and reasonable break time to pump. A spokesperson for Overlake declined to comment on the specific case but said the hospital was “dedicated to supporting breastfeeding and nursing mothers, whether they are employees or patients.”

Hers is one of the 376 investigations done by the Department of Labor since 2010 that HuffPost obtained through public record requests. While the redacted reports shield much of the information like names and job titles, they indicate that nearly a quarter of reports came from women working in the medical field. The case speaks to a broader concern among health care workers, a “pink-collar job” where 78 percent of workers are women.

Their claims include being denied access to a clean, private space, retaliation, and even terminations. The mothers also cited the consequences: a painful infection, mental health concerns and losing the opportunity to keep feeding their babies breast milk.

We don’t know why such a high proportion of the complaints involve health care facilities and nursing in particular. Nurses may be more familiar with this law than other workers, and therefore more likely to file complaints. But many nurses say that time pressures and abbreviated breaks are common problems throughout the industry.

Shielded From View, Free From Intrusion

Of the 62 Labor Department investigations involving health care workers, 25 involved violations for inadequate space. FLSA requires “a place, other than a bathroom, that is shielded from view and free from intrusion from co-workers and the public,” for nursing mothers to pump.

When Ann, an outpatient nurse at a hospital in the Baltimore area, returned to work after having a son in 2017, she had to pump in an open locker room. She faced the same issue in July after having her second child, a daughter.

Ann asked that we only use her middle name, out of concern about retaliation in her workplace. She said the situation has triggered anxiety and made her consider stopping breastfeeding altogether.

It was especially galling, since her employer has been recognized as a “baby-friendly birth facility,” a designation granted to hospitals that promote breastfeeding to families who deliver there.

“It really upset me. They pride themselves on being a family-friendly hospital,” she said. “They say ‘breast is best’ but then the department doesn’t let you pump.”

She recounts constantly being interrupted by other employees, and when she tried to move somewhere else, another nurse allegedly said, “I don’t want to walk in on you and see your tit hanging out.” She’s resorted to pumping in her car.

The complaints HuffPost reviewed detail a number of places new moms have had to pump: a bathroom, a patient’s room, their car, a locker room, the back of an ambulance, in a shared office.

Many got creative in their attempts to preserve their privacy, sticking notes on the door, shoving door stoppers under the inside, covering windows with bed sheets or covering themselves with blankets. 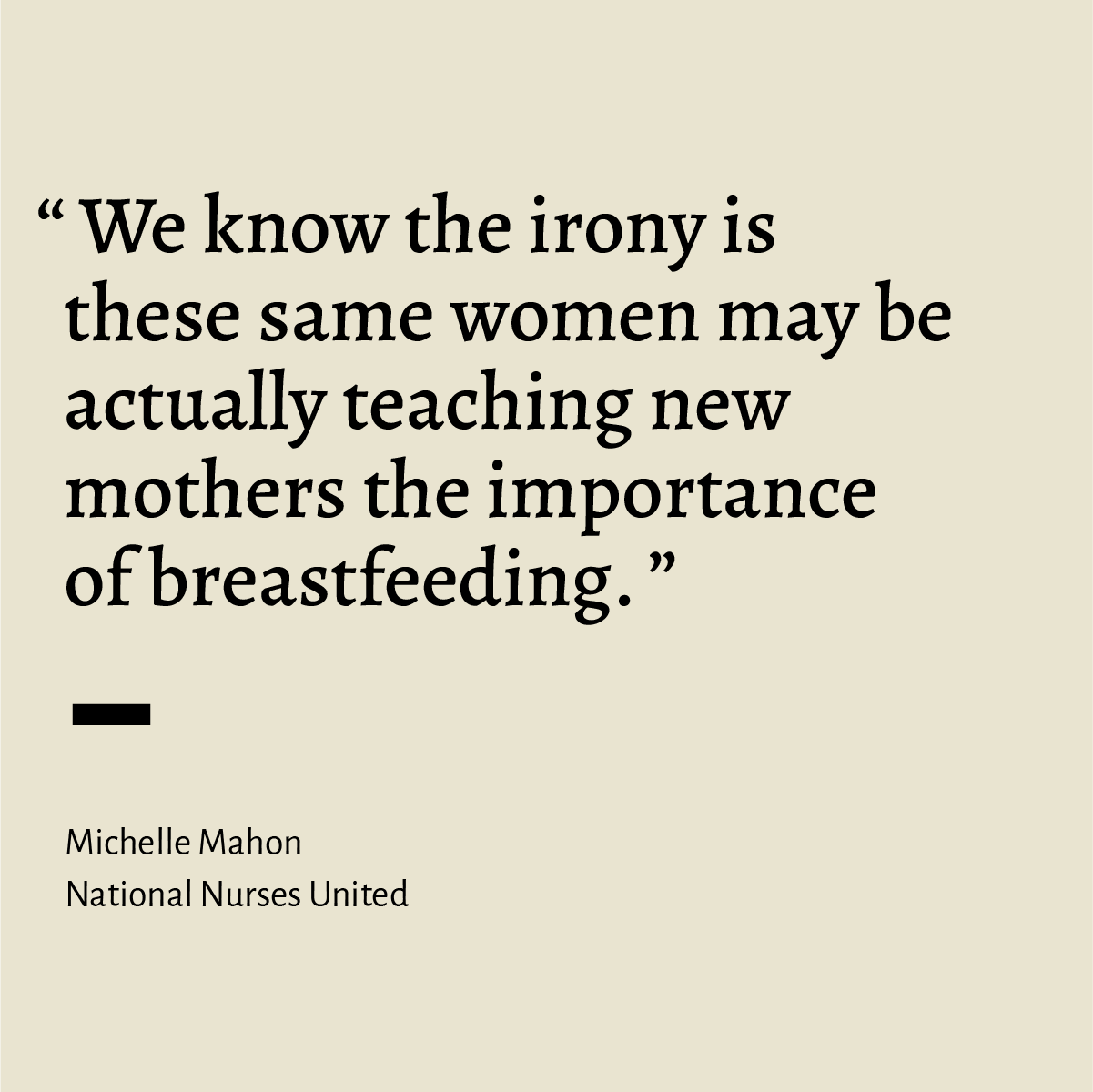 Michelle Mahon, a nursing practice representative with National Nurses United, highlighted that a pumping room should ideally be close to a nursing mother’s work station since most nurses feel obligated first and foremost to their patients.

“We know the irony is these same women may be actually teaching new mothers the importance of breastfeeding,” Mahon said. “It’s just fundamentally interlinked with the inhumanity of health care ― not just for the conditions of ourselves, but really for our patients.”

The FSLA does not force employers to provide an elaborate lactation room, Liz Morris said, deputy director of the Center for WorkLife Law. All that’s required is ensured privacy, a chair and a flat surface that’s not the floor.

“It’s fairly easy to provide both space and time in every industry,” Morris said.

For medical professionals like the woman from Overlake Hospital, the constant interruptions speak to the demands of caring for their patients.

“These women are working under intense time pressure with tight schedules, and it’s often understaffed,” Morris said. “There’s an urgency around the importance of patient care, with a sense of dedication and providing top quality care for their patients, even when they can’t take breaks to take care of their own personal health needs.”

The FLSA requires “a reasonable break time for an employee to express breast milk for her nursing child for 1 year after the child’s birth each time such employee has need to express the milk.” “Reasonable” is a vague term, but the complaints HuffPost acquired indicate most mothers required 20 to 30 minutes every two or three hours.

“In most cases, there should be a level of staffing that allows employees to take breaks and take care of themselves,” Morris said.

A federal bill meant to increase staffing and reduce overworking among nurses has been introduced in both the House and Senate, but it has not gotten much traction so far. States have also considered measures on proper staffing, such as a Massachusetts ballot question that voters rejected in 2018. 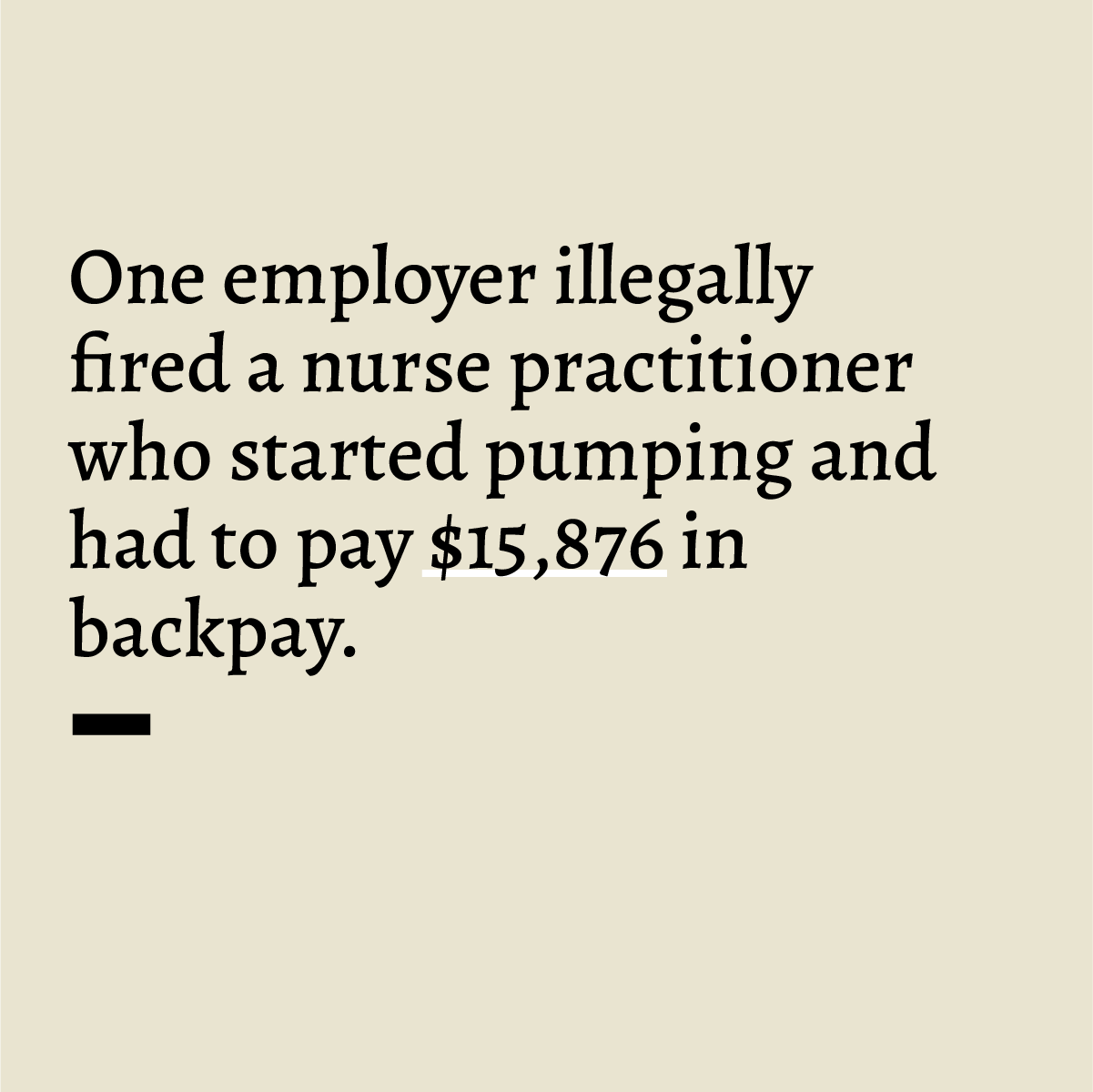 In one Labor Department case, a nurse practitioner was ultimately fired after her employer complained about her pumping schedule. They demoted her job status and changed her hours from full-time to part-time work, which she refused. Investigators concluded she was ultimately owed $15,876 for retaliation and termination.

If female medical professionals do get a break, it’s most likely just a lunch break, according to the reports. Sometimes, that one lunch break is all they get in shifts that can last as long as 12 hours, Mahon said.

“Administrators will say absurdly, ‘You’re responsible for finding your own coverage for a break,’ which is terrible,” she said. “You’re giving them an unsafe patient load and you can’t ethically leave your patients.”

Ann said it can be difficult to find others to step in while she takes her pumping breaks.

“I get attitudes from some of the nurses like ‘I have my own patients,’” she said.

LaTasha S. Perkins, the new physician director of the American Academy of Family Physicians, said that having support from co-workers is essential for nursing mothers. In June, the AAFP updated their policy regarding medical trainees who breastfeed, detailing very similar protections for them as laid out in the FLSA, regardless of whether they’re covered under the law.

“Having breastfeeding support increases productivity, effectiveness on the job, happiness on the job,” Perkins said. “Any hospital or medical system should protect their female trainees and physicians because most are women.”

For Ann, needing to pump started to feel like a personal failing. “I felt like I was letting people down by going to pump,” she said. “I’m trying to keep them healthy, but I’m wondering if I should just switch to formula so it’s one less thing to worry about.”

Other mothers who filed complaints said they faced explicit discrimination ― their caseload was decreased, their hours were changed, or they were forced to quit.

One mother who filed a complaint said she had to quit her job due to the stress of trying to find the time to pump when her employer only gave her 15 minutes to get to a pumping room on a different floor. She was then told investigators could not get her reinstated because she had quit voluntarily. The woman said she “understood, but wanted to ensure the company knew they had to allow for adequate time for expressing milk.” 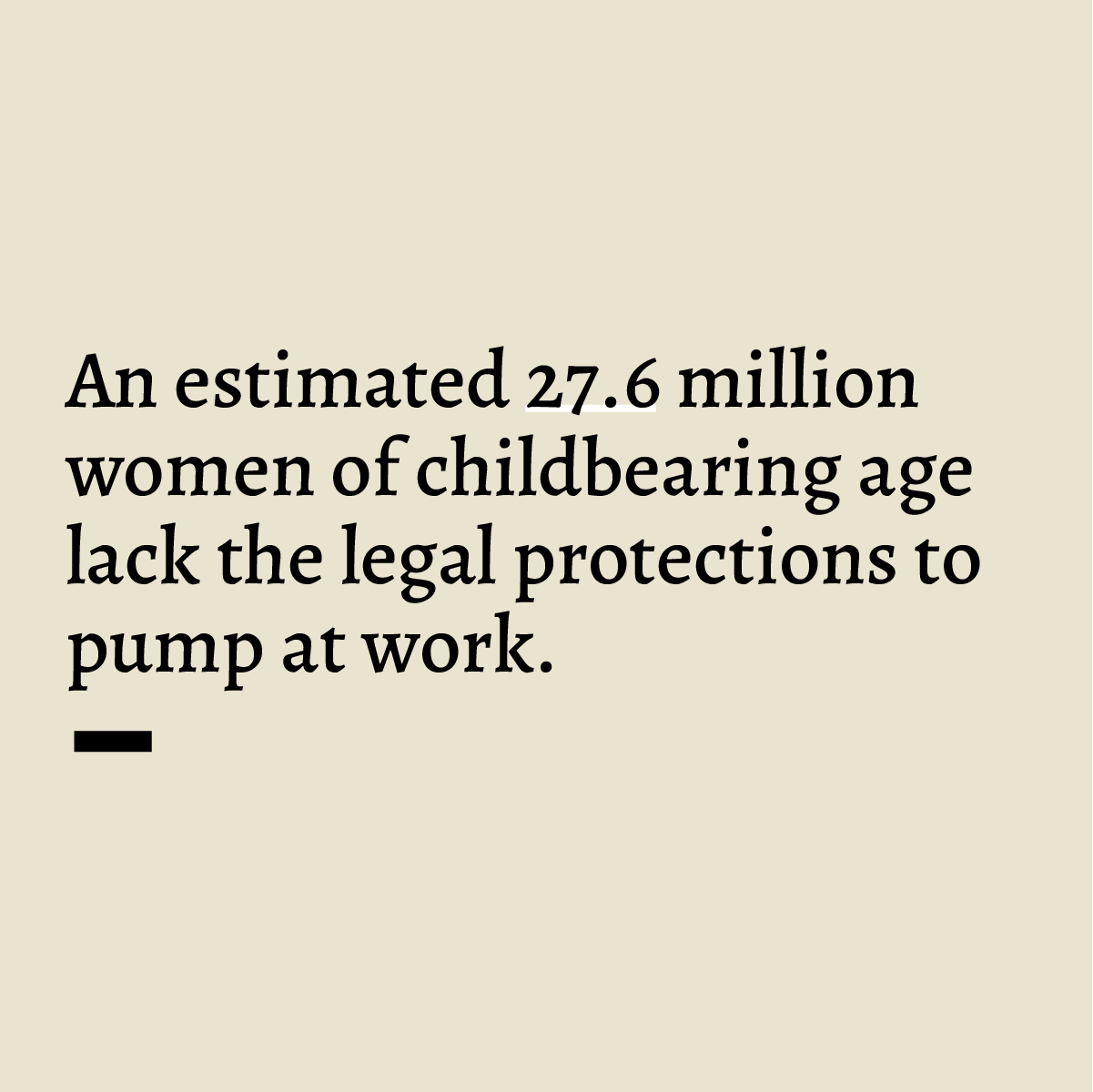 Christina, a physical therapist in Sacramento, California, gave birth to baby girl Harper in March 2019. When she returned to work, she found her clients had been transferred to a new hire, leaving her with no patients to see. She also learned she would not be paid for her pump breaks.

She did the math and realized that if she continued breastfeeding for the full recommended year, she would take a near $10,000 pay cut.

But because of her employment status, she came to believe the FLSA’s protections don’t apply. The law covers mostly hourly employees and excludes many salaried workers. The nursing mothers provision also carves out companies that employ fewer than 50 employees at the facility being investigated.

“It’s frustrating,” Christina said. “I get it because if I’m not seeing patients they’re not making money,” she said. “I’m taking a pretty big hit just to feed my child.”

Ultimately, she decided just to take the pay cut ― she’s been dealing with postpartum depression and could not see taking on more hours to cover the difference. But she’s still paying off student loans and now has child care to pay for, and she’d been saving for a house before giving birth ― a goal that now seems further from attainment.

Last December, the Center for WorkLife Law found that 27.6 million women of childbearing age lack basic protections for breastfeeding because of the definitions of the FLSA.

“It doesn’t matter how much money you make,” Perkins said. “As a mother, you should have the best opportunity to provide for your child.”

The Labor Department’s investigators note the particular hardship for women in the medical field. “Other nursing mothers also have had the same problem with the break time since the employer is a hospital medical center, and employees are not able to take a break due to the nature of the business,” an investigator working on the Overlake Hospital case wrote.

Nursing mothers are left feeling like they can’t find a balance between being a good mom and good employee, Perkins said.

“It’s important and as essential as bathroom breaks,” she said. “We want to work hard. We shouldn’t feel bad for wanting to feed our kids.”

Help us tell more of the stories that matter from voices that too often remain unheard.